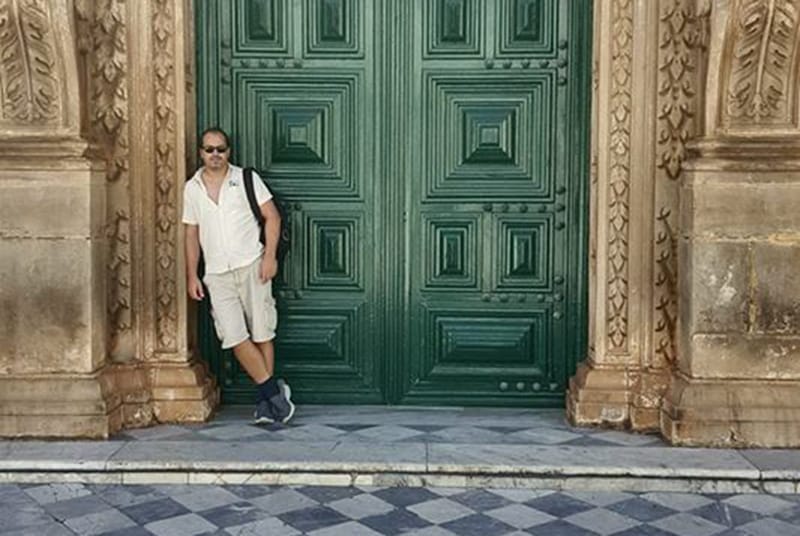 “I think,” laughs Mark Hussey, “I’m just off the coast of Ecuador. But it’s the crack of dawn, so I can’t be entirely sure!” Mark’s geographical uncertainty is understandable: for the last few days he’s been en route from Santiago to Miami aboard the Queen Victoria. A luxury cruise liner, the vessel is currently hosting roughly 1,000 classical music fans and a handful of hand-picked, renowned musicians – among them, the fascinating Mark Hussey. A well-known, self-taught classical guitarist, Mark is currently a long way from his home in Oxfordshire – and even further from his roots. Because this musical half-Cypriot world-traveller was originally a Nicosia local…

Now 39, Mark’s path to musical acclaim had been extremely unusual: born in the UK, he moved to Cyprus for his secondary education – “it feels like yesterday that I was spending my weekends performing in restaurants round Limassol and Ayia Napa!” – and then ended up studying biochemistry at Oxford. A stint as a genetic engineer, a doctorate in biochemistry, and a job with the civil service followed – but despite his excellent qualifications, a life of science just wasn’t on the cards…

“Although I’d been interested in music from a young age, and was able to play a few scales, chords, and basic pieces, I’m a self-taught musician,” he reveals. But hours of painstaking practice, days of teaching himself to read music, and a burgeoning career gave Mark new purpose in life. And then, when he discovered classical guitar, things really took off.

“My interest in classical guitar and flamenco only really came about in my early thirties. I heard a lot of what was being played on the instrument, and thought that I would interpret it differently – particularly the classical music. Music is a language,” he continues, “and while many classical players seem to rely on muscle memory to deliver a song, I’ve always respected the approach of jazz musicians: to be able to understand harmony and play what you feel; never really playing a piece of music the same way twice, and never knowing quite what you’re going to play until you play it…”

This singular approach to classical guitar, coupled with what pundits have dubbed ‘a uniquely Mediterranean musical flair’, have allowed Mark to create quite a name for himself, despite the fact it’s only been barely eight years since he made the leap from biochemistry to music. “It was right in the middle of the financial crisis at the end of 2010, and I started from zero. But that transition to being a musician was the most liberating thing I’ve ever done!” The jump to classical guitar soon followed, a move which has seen him release two albums (the most recent of which, Laid Back, will be out next Sunday) and consolidate his place as one of the foremost musicians of the genre: “It was a natural progression, the right style for me, and there was a market for what I was doing. Plus, playing classical guitar, you’re generally solo guitarist and thus not dependant on unreliable band members!” he grins.

Mark has gradually evolved a style of classical guitar that has seen him lauded the world over. A ‘guitarist’s guitarist’, he’s less well known to the general public but cuts quite a figure among the musical, with Guitarist Magazine referring to his “fabulous guitar playing” and a leading musician with Universal suggesting Mark’s “repertoire choices and arrangements show great taste and musical knowledge; exuding confidence and commanding the listener’s attention.”

This talent for improvisation, for taking the old and making it new, is what has – less than a decade after such a radical career switch – allowed Mark to pick and choose where he performs. Over the last six months, he’s travelled to Sweden, Norway, Finland, France, Spain, Croatia, Egypt, Brazil, Madeira, Morocco, Barbados, St Lucia, Chile, Peru, Iceland and Denmark. He’s cruised around Greenland – “breath-taking!” – visited the archipelago of Cape Verde, and even seen a solar eclipse in the Faroe Islands! But it’s not all life on the ocean wave: due to the classical nature of his guitar-playing, Mark is frequently booked for performances in churches and cathedrals, and in a few days from now will be heading back home for a one-man concert in the cathedral at Stratford Upon Avon.

“It feels great to be living my dream,” he says. “I get to see the world and perform to appreciative audiences who are educated in classical music. And though my biggest challenge is fighting the nerves before each performance – people say I look confident and natural from the moment I get to the stage but internally that’s not what is going on at all! – seeing the joy people get from listening to you perform is an amazing feeling. I’ve no regrets,” he adds. “I could say that I wished I had taken music seriously much earlier but I wasn’t ready then: life experiences help you mature musically too.”

Having a talent that allows you to travel the world – even if you’re not sure quite where you are from one day to the next! – certainly ranks high on most people’s list of ambitions. But for Mark, it’s not only the fulfilment of a dream but an ongoing musical journey which sees him “constantly trying to improve my playing. I have a very busy performance diary and it’s only getting busier from here on out: over the next few months my shows span Chile to Helsinki. Now, I’m just waiting for an invitation to play in Cyprus… In many ways, it would be,” he muses, “a homecoming performance.”

For more information, visit markhussey.com or the YouTube channel ‘Dr Fingerstyle’
Released on March 18, Laid Back is the follow-up solo classical guitar album to the critically-acclaimed concerto Concierto de los sueños, and can be pre-ordered markhussey.com/albums

Job fair for those wanting to work for casino