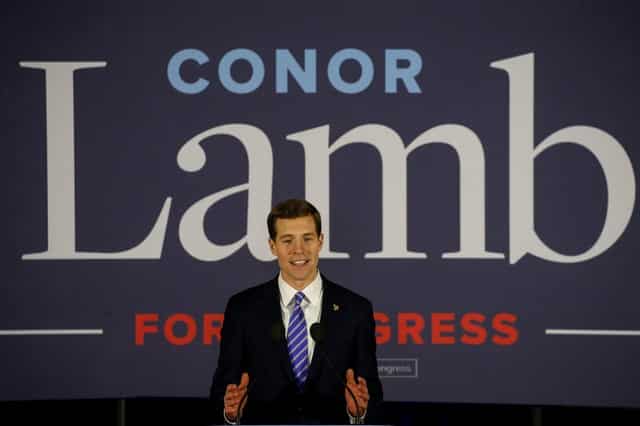 A U.S. House of Representatives election in Pennsylvania that is seen as a referendum on President Donald Trump’s performance was a dead heat on Tuesday, an ominous sign for Republicans eight months ahead of congressional elections.

The district was previously a solidly Republican one that Trump won by almost 20 points in the 2016 presidential election.

However, official results after a nail-biting count on Tuesday showed moderate Democrat Conor Lamb leading conservative Republican Rick Saccone by a fraction of a percentage point with votes counted from 100 percent of precincts.

Election officials then started counting several thousand absentee ballots to try to decide the result but Lamb claimed victory ahead of any official announcement and before TV networks, which often call U.S. elections, had predicted a winner.

“It took a little longer than we thought but we did it. You did it,” Lamb, a U.S. Marines veteran, told cheering supporters.

Democratic sources said absentee ballots were expected to show Lamb winning the election by more than 400 votes, but Saccone did not concede.

“We’re still fighting the fight. It’s not over yet. We’re going to fight all the way to the end. You know I never give up,” state legislator Saccone, 60, said before his rival claimed victory.

The strong showing by Lamb, 33, buoys Democrats nationally as they seek to win control of the U.S. House of Representatives from Republicans in the November midterm elections.

“This is one extra indicator that confirms a fairly pro-Democratic environment, pro-Democratic enough that the House should be in play. Democrats should be able to compete in a lot of different places across the country,” said Kyle Kondik, an analyst at the University of Virginia Center for Politics.

Republican dominance had been so strong in the district, a patchwork of small towns, farms and Pittsburgh suburbs, that Democrats ran no candidates in the previous two U.S. House elections here. Lamb’s image as a moderate seemed to have worked in his favor.

Saccone, who has described himself as “Trump before Trump was Trump,” led the race by more than 10 percentage points in January.

But Lamb, a pro-gun Democrat with strong backing from unions, has since surged in polls as Democratic voters sensed a chance to show their opposition to Trump.

Saccone, a former Air Force counter-intelligence officer, drew criticism toward the end of the campaign by saying that some of his opponents “have a hatred for God.”

The White House arranged a string of visits to energize Saccone supporters. Trump himself held a campaign rally for Saccone last weekend and on Tuesday he again voiced backing for the Republican.

“The Economy is raging, at an all time high, and is set to get even better. Jobs and wages up. Vote for Rick Saccone and keep it going!” Trump said on Twitter.

The contest, to replace a Republican who resigned amid a scandal last year, was the latest good election showing for the Democrats, who also won a governor’s race in Virginia and scored a U.S. Senate upset in conservative Alabama.

Tuesday’s result has little bearing on the current balance of power in the House, but Democrats hope a win will boost their momentum as they try to pick up the 24 seats they need to gain control in November.

Of the 85 races currently viewed as competitive, 55 are in congressional districts that Trump won in 2016, according to the University of Virginia Center for Politics.

Saccone’s poor performance is worrying for Republicans who were sure that tax cuts, the party’s only major legislative achievement under Trump, will be a vote winner this year.

However, the sweeping tax overhaul did little to energize local voters, some of whom dismissed it as a giveaway to the wealthy.

Republicans found it harder than expected to mount effective attacks on Lamb’s positions on abortion, guns and the national Democratic Party.

He has also eschewed the national Democrat brand, saying he would not support House Democratic leader Nancy Pelosi as speaker.

Lamb says he personally opposes abortion but accepts the Supreme Court’s landmark 1973 Roe vs. Wade decision allowing abortion as the law of the land.

Chelsea must be ready to suffer at Barcelona, says Conte