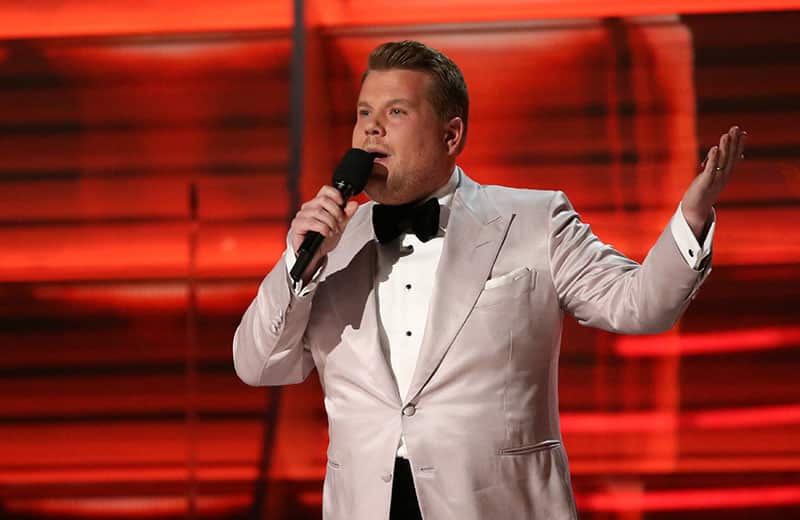 The 39-year-old star appeared on Heart Breakfast with Emma Bunton – who was known as Baby Spice in the band – on Thursday morning (15.03.18) and used the opportunity to give her a nudge with regards to getting the ‘Spice Up Your Life’ hitmakers on his popular musical segment on his ‘Late Late Show’.

When presenter Jamie Theakston asked: “Could we get the Spice Girls in the back of the car? I mean, that’s the elephant in the room, right?”, James replied: “Well, here’s the truth of it…

Corden continued: “I’ll tell you what I want, what I really, really want …

I wanna go in that car and remind the world – the entire planet – of how unbelievable those songs are.”

Corden said: “And, I mean it would break the internet, wouldn’t it? It really would.”

Emma agreed, saying: “It would be special”

Jamie then asked: “So it’s fair to say the offer, the invitation has been made?”

Emma was keen with the idea and asked her fellow bandmates, Mel B, Victoria Beckham, Mel C and Geri Horner, to get on board.

However, James reminded Emma that it wasn’t the first time he’s asked their manager, Simon Fuller, to persuade them to come on his show.

He said: “This is not the first time that this has come up! There’s been endless phone calls that have already been made.”

All five of the Spice Girls reunited last month for lunch at Geri’s house in north London, sending fans into overdrive that they are making a comeback, and James says he got on the phone to Simon straight away after seeing a picture of their meeting on social media.

He said: “I think I got in touch with Simon Fuller about four and a half minutes after that Instagram photo.”

However, Emma recently downplayed rumours they are going to go on tour, saying they were simply “catching up”.

The likes of Will Smith, Adele, Kelly Clarkson, Harry Styles and Ed Sheeran have all sat in James’ Range Rover for a sing-a-long, but James recently admitted to BANG Showbiz that his ultimate guest would be Beatles legend Sir Paul McCartney, saying: “He would be amazing.”

Thousands stream out of Syrian rebel enclave as army advances

Hartley back, Ford and Care dropped for new-look England