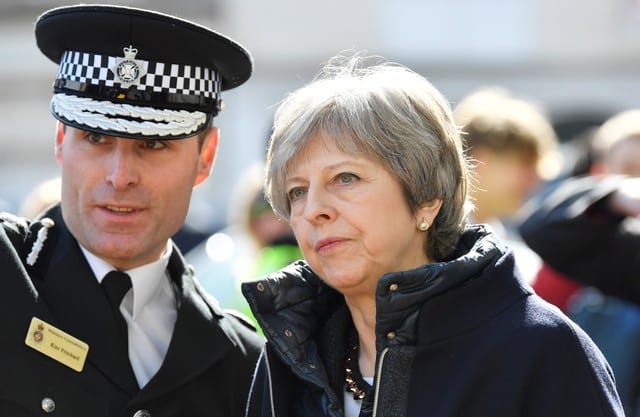 Britain's Prime Minister Theresa May visits the city where former Russian intelligence officer Sergei Skripal and his daughter Yulia were poisoned with a nerve agent, in Salisbury

Britain, the United States, Germany and France jointly called on Russia on Thursday to explain a military-grade nerve toxin attack on a former Russian double agent in England which they said threatened Western security.

After the first known offensive use of such a nerve agent on European soil since World War Two, Britain has pinned the blame on Russia and has given 23 Russians it said were spies working under diplomatic cover at the embassy in London a week to leave.

Russia has denied any involvement in the poisoning. Foreign Minister Sergei Lavrov accused London of behaving in a “boorish” way and suggested this was partly due to the problems Britain faces over its planned exit from the European Union next year.

Russia has refused Britain’s demands to explain how Novichok, a nerve agent first developed by the Soviet military, was used to strike down Sergei Skripal and his daughter Yulia in the southern English city of Salisbury.

“We call on Russia to address all questions related to the attack,” US President Donald Trump, German Chancellor Angela Merkel, French President Emmanuel Macron and British Prime Minister Theresa May said in their joint statement.

“It is an assault on UK sovereignty,” the leaders said. “It threatens the security of us all.”

While the statement signals a more coordinated response from Britain’s closest allies, it lacked any details about specific measures the West would take if Russia failed to comply.

The Western leaders said the use of the Novichok toxin was a clear breach of the Chemical Weapons Convention and international law.

They called on Russia to provide a complete disclosure of the Novichok programme to the Organisation for the Prohibition of Chemical Weapons (OPCW) in The Hague.

Russia says it knows nothing about the poisoning and has repeatedly asked Britain to supply a sample of the nerve agent that was used against Skripal.

Skripal and his daughter have been critically ill since they were found unconscious on a bench in Salisbury, an elegant cathedral city, on March 4. A British policeman who was also poisoned is in a serious but stable condition.

May has directly accused President Vladimir Putin of being behind the attack. Putin, who casts himself as a strong leader able to stand up to a hostile West, is poised to win a fourth term in power on Sunday in Russia’s presidential election.

Putin, who took over as Kremlin chief from Boris Yeltsin on the last day of 1999, has tried to claw back some of the clout that Moscow lost when the Soviet Union collapsed in 1991. He says the West has repeatedly tried to undermine Russia.

Skripal, a former colonel in Russia’s GRU military intelligence, betrayed dozens of Russian agents to British intelligence before his arrest in Moscow in 2004.

He was sentenced to 13 years in prison in 2006, and in 2010 was given refuge in Britain after being exchanged for Russian spies. He was later granted British citizenship.

May on Thursday visited Salisbury, a normally sedate city where police investigators in chemical protection suits and the army have been removing evidence of the poisoning.

Nato Secretary-General Jens Stoltenberg said the attack in Britain was part of a pattern of reckless behaviour from Russia over many years. He said Britain could count on Nato’s solidarity, but said there had been no request by London to activate the alliance’s mutual defence clause.

In London, Foreign Secretary Boris Johnson defended the government’s response to the attack against critics who said it did not go far enough.

He suggested the authorities might also go after assets held in Britain by Russians close to Putin, though he gave no specific details.

His opposite number in Moscow, Lavrov, suggested that one possible motive for the poisoning was to complicate Russia’s hosting of this summer’s football World Cup.

Lavrov also said he hoped Skripal recovered from the attack so that he could shed light on what happened.