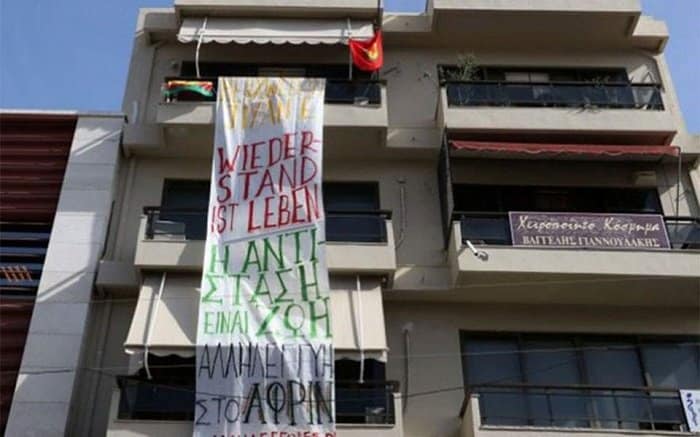 The goup hung a banner from the balcony reading "Solidarity with Afrin" and "Resistance is Living" in Kurdish, German and Greek

A group of people burst into the German consulate on the Greek island of Crete on Friday to stage a protest against the Turkish military offensive in Afrin in northern Syria, police officials said.

It was not immediately clear why German interests were the target. Turkish forces are fighting the Syrian Kurdish YPG militia in the town of Afrin, in a campaign launched nearly two months ago.

“At 0930 (0730 GMT) a group of about 10 persons, their faces covered, stormed into the consulate in the city of Heraklion,” one of the officials said.

They hung a banner from the balcony reading “Solidarity with Afrin” and “Resistance is Living” in Kurdish, German and Greek.

The protesters smashed some windows, another police official said. There were no reports of injuries.

Small-scale attacks on businesses, embassies and government buildings are frequent in Greece. It is slowly emerging from a deep financial crisis during which it has also handled hundreds of thousands of migrants, many from Syria.

House to vote on cycling legistation