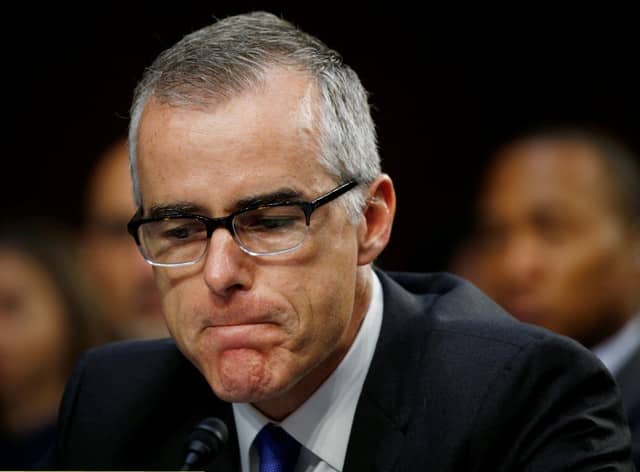 US Attorney General Jeff Sessions fired the FBI’s former No.2 official Andrew McCabe Friday, prompting McCabe to say he is being targeted because he is a crucial witness into whether President Donald Trump tried to obstruct the Russia investigation.

Sessions, in a statement on Friday, said he felt justified in firing McCabe after the Justice Department’s internal watchdog found he leaked information to reporters and misled investigators about his actions.

“The FBI expects every employee to adhere to the highest standards of honesty, integrity and accountability,” Sessions said.

But McCabe, who played a crucial role in the bureau’s investigations of Hillary Clinton and Russia’s interference in the 2016 US election, denied those claims and said he is facing retaliation by the Trump administration.

In a lengthy statement, McCabe said he believes he is being politically targeted because he corroborated former FBI Director James Comey’s claims that Trump tried to pressure him into killing the Russia probe.

Trump ousted Comey last year and acknowledged in a televised interview that he fired Comey over “this Russia thing.”

McCabe’s dismissal came two days before his 50th birthday, when he would have been eligible to retire from the Federal Bureau of Investigation with his full pension. The firing – which comes nine months after Trump fired Comey – puts McCabe’s pension in jeopardy.

It also is likely to raise questions about whether McCabe received an overly harsh punishment due to political pressure by the Republican president, who has blasted McCabe on Twitter and called for his ouster.

Comey’s firing paved the way for Deputy Attorney General Rod Rosenstein to tap Special Counsel Robert Mueller, who is now leading the investigation into possible collusion between Trump’s campaign and Russia. Trump has denied there was any collusion.

“I am being singled out and treated this way because of the role I played, the actions I took, and the events I witnessed in the aftermath of the firing of James Comey,” McCabe said in his statement.

“This attack on my credibility is one part of a larger effort … to taint the FBI, law enforcement, and intelligence professionals more generally.”

Trump posted a message on his twitter account early Saturday, praising the action and blasting both McCabe and Comey.

Trump wrote, “Andrew McCabe FIRED, a great day for the hard working men and women of the FBI – A great day for Democracy. Sanctimonious James Comey was his boss and made McCabe look like a choirboy. He knew all about the lies and corruption going on at the highest levels of the FBI!”

McCabe had stepped down from his position as FBI deputy director in January but remained on leave pending retirement.

His departure was triggered by a critical report from the Justice Department’s inspector general that eventually led the FBI’s Office of Professional Responsibility to recommend he be fired.

The report, which has yet to be made public, says McCabe misled investigators about his communications with a former Wall Street Journal reporter who was writing about McCabe’s role in probes tied to Clinton, including an investigation of the Clinton family’s charitable foundation.

In his statement, McCabe denied ever misleading investigators.

He added that the release of the inspector general’s report was “accelerated” after he testified behind closed doors before the US House Intelligence Committee where he revealed he could back up Comey’s claims. Comey’s firing has become central to questions about whether Trump unlawfully sought to obstruct the Russia investigation.

McCabe could potentially be a crucial witness in Mueller’s investigation.

Trump and other Republicans have accused McCabe, a lifelong Republican who worked at the FBI for more than 20 years, of political bias and conflicts in connection with his oversight of investigations related to Clinton.

Some of that criticism stemmed from the fact that his wife, Jill McCabe, a Democrat, received donations for her unsuccessful 2015 Virginia state Senate campaign from Terry McAuliffe, who was then the state’s governor and an ally of the Clintons.

McCabe did not start overseeing the investigations until after his wife’s campaign ended, the FBI has said, and therefore did not have a conflict of interest.

On Twitter last year, Trump questioned why McCabe was allowed to oversee an investigation into Clinton’s use of a private email server while his wife received donations from “Clinton puppets.” He said McCabe was “racing the clock to retire with full benefits.”

Behind closed doors, Trump also asked McCabe who he voted for in the presidential election and referred to his wife as a loser, according to a source familiar with the matter.

McCabe initially did not respond to Trump’s question but later told Trump he did not vote in 2016, the source said.

Asked about this in January, Trump said he did not recall asking McCabe whom he voted for.

The inspector general’s report is largely focused on how McCabe answered questions about whether he leaked to the press in advance of a story that was critical of his oversight into the Clinton foundation investigation.

McCabe contends he did not view this as a leak but as an authorized disclosure that is commonplace in Washington between reporters and government officials.

He said he answered questions truthfully, and later, when he felt investigators misunderstood his answers, he tried to clarify his responses with them.

At least 15 dead as migrant boat sinks off Greek island