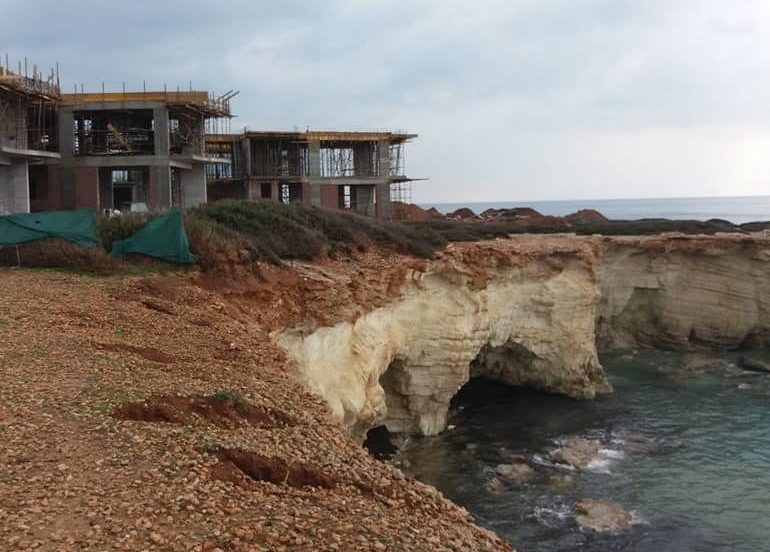 With emotions running high over a proposed ‘white zone’ suggested by Green party MP George Perdikis postponing development in the sea caves area of Peyia, a public meeting on Sunday looks set to be well attended by locals and council members.

The white zone suggestion is opposed by most of the council, with the exception of local resident and councillor, Linda Leblanc.

“We need to have a masterplan for the area and any development should be sustainable and exist alongside the environment without destroying it, as is the law,” she said.

She told the Sunday Mail that whist she understands the wishes of Peyia landowners to exercise their right to develop their land, she supports the idea of a white zone, that effectively would mean that for a short period of time no building permits along the coastline from Ayios Giorgos to Coral Bay would be issued or examined, so the state could take decisions on protecting the area.

The suggestion comes after weeks of demonstrations and press reports about the six villas being built right by the sea caves area and the news this week that an environmental impact authorisation has just been granted for a five-star, eight-storey hotel and 44 villas at nearby Kafizis beach.

The wider public has been angered over environmental damage at the sea caves, which are a birthing spot for the endangered Mediterranean monk seal (monachus monachus).

NGOs – including Save Akamas-Save Cyprus – environmentalists and nature lovers are encouraging the public to take a stand against such projects in Cyprus before it’s too late.

Agriculture Minister Costas Kadis entered the fray on Friday, saying he would announce 20 measures to help resolve the ongoing debate.

Some of the proposed measures Kadis is putting forth include forbidding water sports and fishing within 300 metres of the closest caves used by the monk seals and the creation of a buffer zone that will not allow development within a certain distance of the beach’s protection zone.

Leblanc said that as much of the coastline and adjacent land in Peyia is privately owned, locals are up in arms, incorrectly believing that a white zone, if approved, could be introduced almost overnight, and then they would be ‘stuck’ with a no build zone for the foreseeable future.

“This is not so, the zone would be in place only until after proper environmental studies have been carried out and conclusions reached. It is very complicated, as much of the coastline of Peyia is Natura 2000 marine protected and the surrounding land zoning is all different.”

The European Commission’s Natura 2000 is a network of sites selected to ensure the long-term survival of Europe’s most valuable and threatened species and habitats. How a site is chosen depends on what it aims to protect and stems from the Habitats Directive, which ensures the conservation of a wide range of rare, threatened or endemic animal and plant species.

Natura 2000 protects not only designated areas of land but also marine habitats. More than 3000 marine Natura 2000 sites have been designated, which cover more than five per cent of the total EU marine area (over 300,000 km2).

Klitos Papastylianou, from the Initiative for the Protection of the Natural Coastline, said that the area of the ‘sea caves’ in Peyia covers the entire area from Aspros River in the north and Keratidi Bay in the south and is not only a Marine Protected Area (MPA) but also includes a terrestrial area along the coastline of Peyia municipality.

“The entire sea cave area is included in the Natura 2000 network, both as a Site of Community Interest and Special Protection Area Akamas Peninsula” he said.

Additionally, the entire area is situated within the Beach Protection Zone (92.3m) and also should be protected as part of the Integrated Coastal Zone Management Protocol of the Barcelona Convention (100m).

Furthermore, numerous declared ancient monuments are found in the area, mostly from Aspros River to Kafizi, he added.

In 2008 the relevant minister signed off a few areas which were rezoned for development and these included the area where the six contentious villas are being built, said Leblanc.

The councillor said that the government is obliged to follow EU law and this includes the stipulations of Natura 2000. Perdikis has said that the Greens would lodge a formal complaint with the EU.

In March 2017 a preliminary environmental impact authorisation was granted for the six villas being built by Leptos Estates without an appropriate assessment, he said.

Construction of the villas got underway mid-September 2017, following all of the necessary permits being granted.

Korantina Homes and Celicandia both have the same managing director, George Ioannou. The area is already home to Cap St George a luxury beach club and restaurant also developed by Korantina homes.

Reports indicate that this week work at the six villas has speeded up and all of the developer’s signs have been removed.

Currently, both the auditor general and the attorney general are investigating to see if the rezoning of the area included any discrepancies, and there could be consequences if any are found, said Leblanc.

Leblanc noted that Peyia Mayor Marinos Lambrou, who is actively trying to find a solution to the current situation, requested all of the relevant information from the land registry to check who owns land close to the coastline that would be affected by a white zone.

Leblanc said that most of it appears to privately owned and belong to locals, which is why they are adamant that they want to hold onto their right to build, she said.

The decision to hold an ‘all Peyia public meeting’– which is only open to those from the area – was taken following an extraordinary council meeting on Thursday called by Lambrou to discuss the development at the sea caves.

Leblanc said the government should have implemented a plan on how to integrate development alongside Natura 2000.

“Development is permitted, but it is very specific and mustn’t have an impact on any of the protected species,” she said.

The ‘all Peyia public meeting,’ will be held in the centre of the village on Sunday afternoon at 5pm.