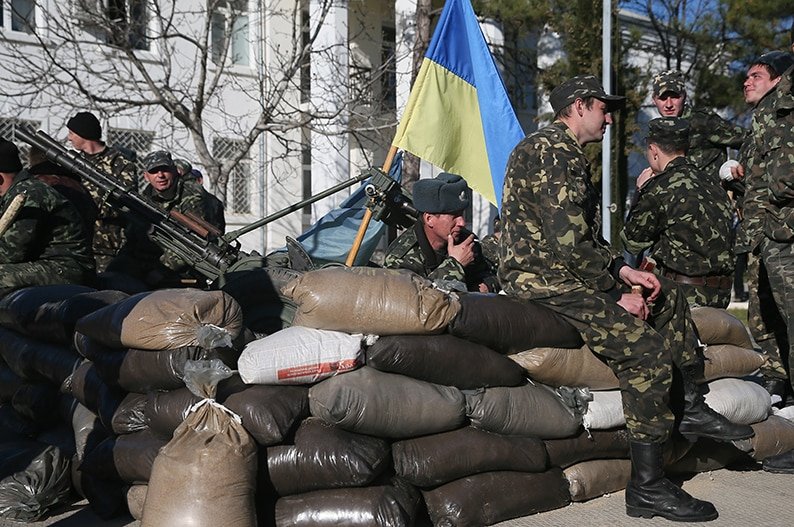 Ukrainian soldiers before the annexation in March 2014

It has already been four years since the beginning of the illegal occupation of the Autonomous Republic of Crimea and the city of Sevastopol by the Russian Federation.

Just to recap how it happened: on February 27, 2014, Russian troops captured the Crimean parliament and government building and raised the Russian flag. In a seized building deputies of Crimea’s Verkhovna Rada (parliament) announced an illegal referendum on the status of the peninsula. On the same day, unidentified soldiers – afterwards dubbed “green men” – began to block Ukrainian military units.

The Kremlin originally described the armed Russians in Crimea as local self-defence forces, but later Russian President Vladimir Putin personally admitted that they were regular troops from the Russian Federation.

The transport and information blockade of the Crimea followed, and in March 2014 a sham referendum was conducted, followed by Russia’s unlawful and unilateral annexation of Crimea.

The occupation regime was established in the peninsula almost in a twinkling of an eye. The signatures of the Russian president on the Friendship and Cooperation Treaty with Ukraine and the Budapest Memorandum should have served as a safeguard against developments of this kind. However, when the head of Ukraine’s repressive kleptocratic regime Viktor Yanukovych abandoned his presidential post under pressure from the mass protests, Russia committed an unprovoked violation of Ukraine’s borders.

If this so-called accession were not so illegal Russia would have let international observers monitor the referendum and would not have been in such a rush to annex Crimea. Instead of providing a free and open democratic referendum in Crimea, for the last four years the Russian authorities have totally disregarded international law by resorting to large-scale and serious human rights violations in the occupied territories, as they attempt to break and subdue those who disagree with the Kremlin’s aggressive policy.

Russia has blatantly disregarded the judgement delivered on this issue by the International Court of Justice. Russia has directly organised and encouraged its proxies to carry out similar activities in the Donetsk and Luhansk regions. Moreover Russian occupation authorities have denied access to Crimea by the United Nations Human Rights Monitoring Mission in Ukraine despite its existing mandate.

During the period of occupation, numerous international human rights organisations have provided abundant evidence of the persecution and illegal detentions of ethnic Ukrainians and activists from Crimea’s Tatar community. The activities of the Mejlis – the only representative body of the Crimean Tatar people – were also banned. The situation has been complicated even more by the active militarisation of the peninsula, which now poses a direct threat not only to Ukraine, but also to other member states of the EU, Nato and other international organisations.

UN resolutions on the territorial integrity of Ukraine, supportive decisions from other influential international organisations, maintaining lasting sanctions pressure on the aggressor state and the international community’s adherence to not recognising Crimea’s annexation are among the most important means of counteracting Russian aggression.

Here I would like to stress the latest UN General Assembly resolution “Situation of human rights in the Autonomous Republic of Crimea and the city of Sevastopol”, which condemned serious violations and abuses committed against its residents. There is also the December 2017 report from the prosecutor’s office of the International Criminal Court which assessed that the situation in Crimea and Sevastopol amounts to an international armed conflict between the Russian Federation and Ukraine which began at the latest on February 26, 2014.

This report as well as others from both the UN’s and the Council of Europe’s commissioners for human rights have documented crimes in occupied Crimea. These include disappearances, killings, ill-treatment, politically motivated prosecutions, discrimination, abuses of freedom of expression, forced conscription of Crimean residents to serve in the Russian armed forces, deprivation of the rights for fair and regular trial, transfer of part of the civilian population of the Russian Federation into Crimea and of part of the population of Crimea outside the territory, seizure of property and the alleged harassment of the Crimean Tatar population.

The occupying state has resorted to taking Ukrainian citizens hostage and, as a result of fabricated cases, dozens of people have been illegally detained in Russia and in the temporarily occupied territories of Crimea and eastern Ukraine. Their release remains a major priority for Ukraine and the international community. This will also be a priority issue during Ukraine’s current membership of the Human Rights Council during from 2018 to 2020.

The whole international community urges Russia as the occupying power to uphold its obligations under international law and to ensure access to Crimea by established international human rights mechanisms which would undoubtedly contribute to improving the human rights and everyday life of the peninsula’s residents.

Respect for human rights should be the key rule of any state. Russia should be no exception.

The results of Sunday’s so-called Russian presidential “elections” in the temporarily occupied territories of Crimea and the city of Sevastopol, are null and void from the outset and under no circumstances should be recognised.

Borys Humeniuk is the Ukrainian ambassador to Cyprus