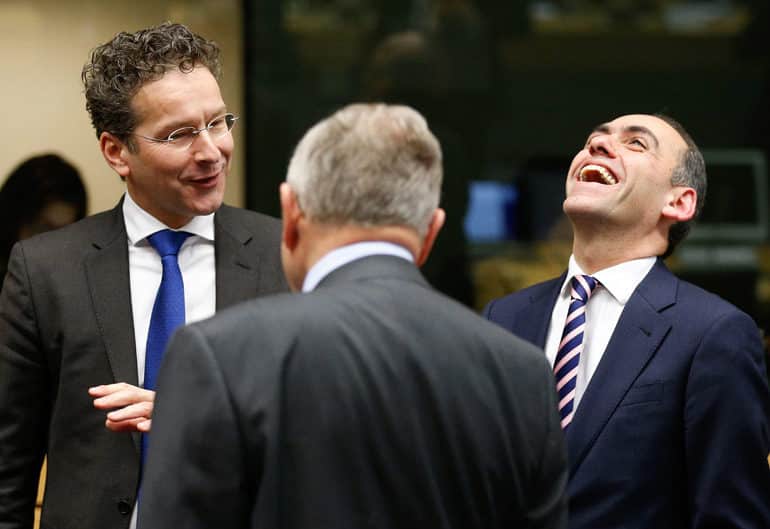 It was all smiles and pats on the back for Finance Minister Harris Georgiades as Cyprus exited its bailout adjustment programme in March 2016, earlier than expected. The congratulations were a far cry from the dramatic, drawn-out 2013 Eurogroup meetings that began on March 15 and ended up ten days later with an unprecedented seizure of deposits and the winding down of the island’s second largest bank.

That first meeting led to a protracted bank holiday and capital controls to prevent a bank run and money from flying out the country. They lasted two years, but again defying all the expectations, were fully lifted a year before the island successfully completed its programme.

March 16, 2013 was a Saturday, and while rumours had been circulating for weeks previously that bank accounts would be hit, after the first Eurogroup meeting, most Cypriots woke up shell-shocked to hear the news that the Eurogroup had put a haircut on deposits on the table.

Instinctively, the first reaction was to raid the ATMs, not knowing or not caring that they were doing more damage.

But those two weeks also brought about a side of Cypriots that not many people had expected – to the disappointment of foreign media outlets — a sense of calm, dignity and stoicism in the face of adversity, despite their anger at being the first and, so far, the only country to be treated this way.

Cyprus had officially sought a bailout on June 25, 2012, bringing some relief to many people who thought that the Demetris Christofias administration should have done so at least a year earlier after a munitions explosion took out the island’s main power station causing rolling blackouts and dealing yet another blow to an ailing economy.

By June 2012, the island’s two biggest banks, Bank of Cyprus and Laiki, had suffered a combined loss of €4.5bn from the restructuring of Greek debt.

Even before that, the apparent inability of the state to deal with a potential crisis in its oversized banking sector had led to a string of downgrades by ratings agencies, effectively shutting Cyprus out of international markets by May 2011.

In October 2011, the Christofias administration managed to secure a €2.5bn loan from Russia that it had hoped would be enough to finance the state’s needs until the 2013 February presidential elections thus avoiding a bailout from the IMF and the EU.

However, the Greek haircut had brought Laiki close to insolvency and the lender was bleeding deposits and relying heavily on emergency liquidity from the European Central Bank (ECB).

Efforts were made to find investors but no one was willing to touch the sinking lender. In May 2012, the government committed €1.8bn of money it didn’t have in a bid to keep it afloat but it still resisted calls to seek a bailout.

Desperately seeking to avoid the inevitable, Christofias applied to Moscow for another loan in June 2012. By refusing to complete negotiations for an assistance programme with the Troika at that time he plunged the economy deeper into trouble.

Even after he did apply for a bailout, Christofias still played for time but was eventually forced to agree on a deal in November 2012 when he was told that the ECB would be cutting Laiki’s lifeline.

With most of the cost-cutting and tax-raising measures in place by December, one of the main outstanding issues relating to the bailout was the recapitalisation of the banks. This was briefly put on the back burner as Cyprus geared up for February’s presidential elections.

Talk of a deposit seizure had started before the elections but it was either rejected by the government or ignored.

In December 2012, the ruling party Akel leader Andros Kyprianou had said the lenders had demanded sweeping privatisations and a haircut on deposits “but the government resisted”. Others looked at it differently, saying Christofias deliberately dragged his feet until the elections to let the bomb blow up in the hands of the new president, Nicos Anastasiade.

In February, just before the elections, citing a confidential memo, the Financial Times reported that the EU was considering a bail-in of investors and depositors to reduce the financial assistance to Cyprus and make its debt sustainable.

Anastasiades pledged that he would not accept a bail-in. That promise, he conceded later, was a big mistake.

He was elected president on February 24 and around a week later the government agreed to submit banks to independent scrutiny amid continuous reports of large-scale money-laundering.

Lenders also visited the island to gather information on semi-governmental organisations as part of the deal to finalise the bailout package.

Just a few weeks after his election, Anastasiades attended the Eurogroup meeting to finalise the island’s bailout deal.

The EU and the IMF refused Cyprus’ request for a €17bn bailout, agreeing instead to give €10bn. Banks would have to finance their recapitalisation on their own.

During a lengthy and acrimonious meeting on March 15 and 16, Anastasiades “with a gun to his head” had to agree to a €10bn rescue package that included, among other stipulation a seizure of deposits across the board – a 9.9 percent one-off levy on those over €100,000 and 6.75 per cent on deposits below that.

The levy was expected to raise €5.8bn.

The deal was reached early on Saturday morning. As Cyprus woke up in the aftermath of the bombshell, people raided bank ATMs in a bid to get as much cash as possible out of the system.

Realising its mistake, on Sunday the Eurogroup rescinded its decision as deposits of up to €100,000 were guaranteed and proposed instead a haircut of 15 per cent on uninsured deposits in all banks, not just Laiki and Bank of Cyprus.

However, the new decision, although communicated to the House by the Central Bank governor, was ignored as the parties were stridently opposed to a bail-in.

On March 17, an emergency debate in parliament was postponed as the government pushed for a vote before banks reopened on Tuesday following a three-day holiday weekend.

On March 19, parliament rejected the haircut as protesters outside demanded a ‘No’ vote. MPs later celebrated with the crowd, but the reality was they had rejected the bill without a plan B.

The bank holiday was extended until March 26, as the government desperately sought financial assistance from Moscow – an exercise in futility.

In another panicked move, it was also decided to set up a solidarity fund to collect money to recapitalise banks without the EU’s assistance.

By the time the inevitable happened and Cyprus returned to the Eurogroup on March 25, the conditions were much worse. Cyprus was warned that it would crash out of the Eurozone if it did not agree with the terms.

Europeans initially wanted to shutter both big banks but they were eventually convinced to only wind down Laiki, which at that time owed some €9bn in emergency liquidity assistance. All deposits in Laiki over €100,000 were lost.

Bank of Cyprus would have to finance itself, eventually seizing 47.5 per cent of deposits over €100,000 in return for equity. Other banks were spared.

Immediately following the agreement, cash was flown in to feed the island’s banks in anticipation of them opening after around two weeks during which money had been rationed through ATMs.

The banks finally re-opened on March 28 amid an international media circus expecting panic and high drama.

Despite their anger and fear, Cypriots remained calm and collected. At some branches journalists outnumbered customers and the widely anticipated bank run and drama never materialised.

Asked by a foreign journo if she was trying to get money out an elderly woman said: “It’s none of your business.”

Cypriot MEP calls for mass participation in Famagusta visit in May