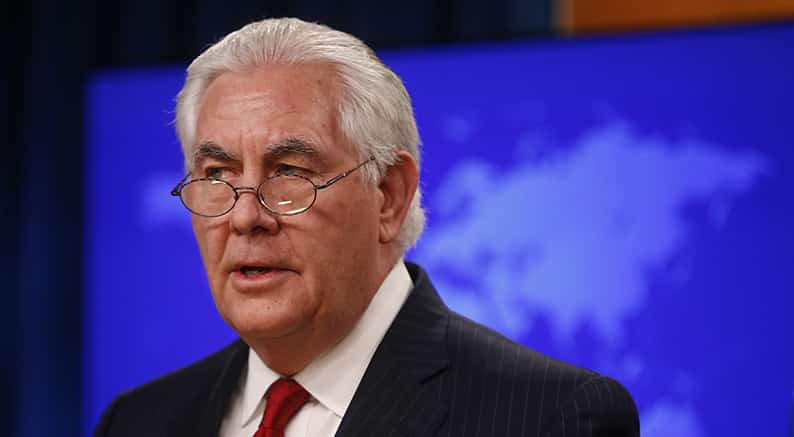 Rex Tillerson did not suffer fools gladly. He called Donald Trump a “moron” in a private conversation after one meeting at the Pentagon and did not take the opportunity to deny it when a journalist asked him in public. In meetings with the president, he would “roll his eyes and slouch” whenever Trump said something he thought was particularly stupid. It’s amazing that he lasted as long as he did.

He wasn’t a very good secretary of state either. He gutted the State Department in the name of efficiency, and large numbers of experienced diplomats quit in despair as he ‘downsized’ the organisation. His only real achievement in his fourteen months in office was to restrain Trump from doing some truly dangerous things like starting a major confrontation with Iran. But we’ll miss him now that he’s gone.

Donald Trump used to enjoy dismissing people with a brutal ‘You’re fired!’ when he was doing reality television, but he seems to have problems doing it face-to-face. Tweets addressed to the world at large are more his style, with his actual victims left to find out from the media. But he is getting rid of the people who question his judgement at an impressive rate: 35 senior people have been fired or quit in little more than a year.

The net effect of all this ‘turmoil’ in the White House, unsurprisingly, has been to remove most of the people whose ideas, values, or experience and knowledge of the world led them to disagree with Trump’s obsessions, his policies (to the extent that he has any), or just his whims of the moment. What’s left, for the most part, are the yes-men and women.

The most notable remaining exceptions are the three generals who hold high positions in the Trump administration: his chief of staff, John Kelly, the defence secretary, James Mattis, and the national security advisor, HR McMaster. But McMaster is widely rumoured to be next for the chopping block, and even Kelly’s willingness to continue shouldering the role of senior grown-up indefinitely is to be doubted.

The era of adult supervision in the White House is coming to an end, and Donald Trump is more and more “free to be Donald.” As he said on Tuesday, “I’m really at a point where we’re getting very close to having the Cabinet and other things that I want.”

The Cabinet he wants is one that is entirely free from the constraints that were initially imposed on him by the Republican Party’s establishment. He is a populist who cherry-picks ideas from anywhere, and no more a Republican than he is a Democrat. In fact, he once was a Democrat, and even considered trying to hijack the Democratic Party’s presidential nomination before the 2008 election.

In the end he hijacked the Republican Party instead, but it did try to rein him in by putting orthodox Republicans in key positions in his administration. His struggle to be free began with the dismissal last July of the Republican Party’s choice as his chief of staff, Reince Priebus. It has ended in total victory in the past two weeks with the resignation of his chief economic adviser, Gary Cohn, and the firing of Rex Tillerson.

Cohn resigned last week because of Trump’s decision to impose steep tariffs on US imports of steel and aluminum. The Republican Party has been a staunch supporter of free trade for the past half-century, and Cohn feared that the new tariffs were likely to cause an international trade war that impoverishes everybody. Trump doesn’t care about that. “Trade wars are good,” he said. “And easy to win.”

His new Secretary of State, Mike Pompeo, is a hard-liner who shares Trump’s obsession with breaking the international deal that stops Iran from developing nuclear weapons for the next ten years. “When you look at the Iran deal, I think it’s terrible. I guess (Tillerson) thought it was OK,” he said. “With Mike Pompeo, we have a very similar thought process. I think it’s going to go very well.”

So stand by for Trump to alienate all of America’s main allies by sabotaging a treaty they worked very hard to achieve. Since he has swallowed Saudi Arabia’s argument that Iran is an ‘expansionist’ power that must be stopped, even direct military clashes between the US and Iran, especially in Syria, become a lot more likely.

And what about the unprecedented meeting with North Korean leader Kim Jong-un that Trump agreed to last week (without consulting Tillerson)? In theory it’s a good idea, because nuclear war in the Korean peninsula is a very bad idea. But there are few people left around Trump who can steer him away from disastrous decisions. They can’t even make him read his briefing papers.

Trump’s foreign policy, perhaps not so simple after all