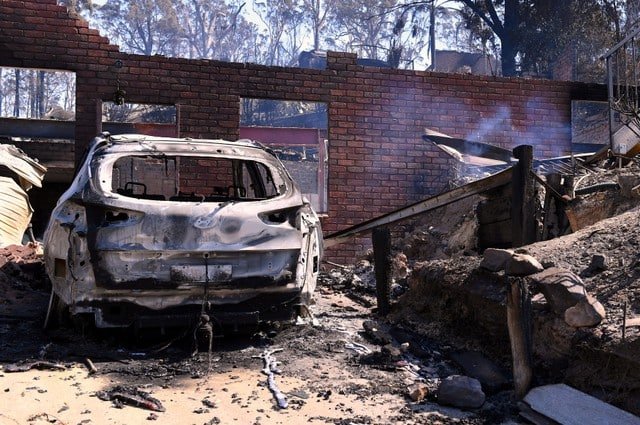 Smoke rises near a destroyed car and home after a bushfire swept through the town of Tathra, located on the south-east coast of New South Wales

Australian authorities urged people to remain alert on Monday as bushfires that have destroyed dozens of homes, killed cattle and forced hundreds of residents to flee continued to burn out of control in the southeast of the country.

No deaths or serious injuries were reported on Monday but the bushfires have caused extensive damage in rural areas of Victoria and New South Wales (NSW), Australia’s two most populous states. More than 100 houses were damaged or destroyed, authorities said. “At this stage (there have been) no lives lost,” Prime Minister Malcolm Turnbull said at a news conference in the small NSW coastal town of Tathra.

“It is just a great credit to the firefighters, to the volunteers, the emergency workers – all of the community has pulled together and provided such great support,” he said.

The fires, believed to have been sparked by lightning on Saturday, were fanned by dry, hot winds as temperatures reached 41 degrees Celsius (106 Fahrenheit) on Sunday.

Emergency officials said conditions should ease later on Monday but “watch and act” warnings remained in place for five locations.

The fire also set off an argument among Australia’s politicians on whether climate change was a contributing factor to the blazes.

“You can’t attribute any particular event, whether it’s a flood or fire or a drought …to climate change. We are the land of droughts and flooding rains, we’re the land of bushfires,” Turnbull said.

Authorities said some 69 houses were destroyed and a further 39 were damaged and 30 caravans or cabins were also wiped out in Tathra, where residents fled to the beach on Sunday to avoid the flames as flying embers quickly carried the firefront forward.

About 700 residents were evacuated to centres set up at the nearby town of Bega and several schools in affected areas were closed on Monday.

NSW Rural Fire Service Deputy Commissioner Rob Rogers earlier told the Australian Broadcasting Corporation that five of 22 fires had not yet been contained.

“There’s still a lot of fire around the landscape,” he said, warning that it would still be several days before they were extinguished.

About 280 firefighters were battling the blazes, while 22,000 homes were without power in the region after high winds brought down trees, Emergency Management Commissioner Craig Lapsley said late on Sunday.

In January, hundreds of holidaymakers had to be evacuated by boat from the beaches of the Royal National Park south of Sydney when they became trapped by bushfires.

The 2009 Black Saturday bushfires in Victoria killed 173 people and injured more than 400.