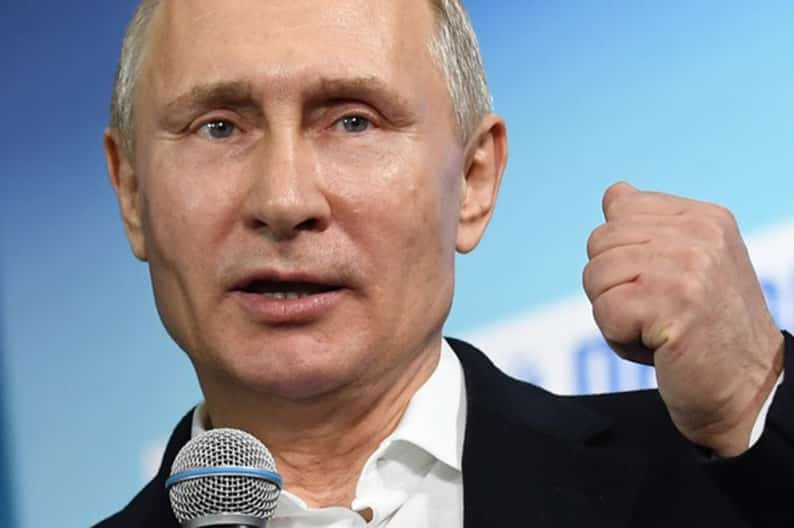 Russian President Vladimir Putin struck a softer tone towards the West on Monday after winning his biggest ever election victory, saying he had no desire for an arms race and would do everything he could to resolve differences with other countries.

Putin’s victory, which comes at a time when his relations with the West are on a hostile trajectory, will extend his political dominance of Russia by six years to 2024. That will make him the longest-serving ruler since Soviet dictator Josef Stalin and has raised Western fears of spiralling confrontation.

But Putin, 65, used a Kremlin meeting with the candidates he soundly defeated in Sunday’s election to signal his desire to focus on domestic, not international, matters, and to try to raise living standards by investing more in education, infrastructure and health while reducing defence spending.

“Nobody plans to accelerate an arms race,” said Putin.

“We will do everything to resolve all the differences with our partners using political and diplomatic channels.”

His comments, which are likely to be heard with some scepticism in the West following years of confrontation, mark a change in tone after a bellicose election campaign during which Putin unveiled new nuclear weapons he said could strike almost any point in the world.

Russia is currently at odds with the West over Syria and Ukraine; allegations of cyber attacks and meddling in foreign elections; and the poisoning in Britain of a former Russian spy and his daughter. As a result, relations with the West have hit a post-Cold-War low.

With more than 56 million votes, it was Putin’s biggest ever win and the largest by any post-Soviet Russian leader.

But the Organization for Security and Co-operation in Europe (OSCE), a rights watchdog, said restrictions on fundamental freedoms, as well as on candidate registration, had restricted the scope for political engagement and crimped competition.

“Choice without real competition, as we have seen here, is not real choice,” the OSCE said in a statement.

The CEC said earlier on Monday it had not registered any serious complaints of violations.

Backed by state TV and the ruling party, and credited with an approval rating of around 80 per cent, Putin faced no credible threat from a field of seven challengers.

Navalny, who had called on voters to boycott the election, urged his supporters not to lose heart and said his campaign had succeeded in lowering the turnout, accusing authorities of being forced to falsify the numbers.

Near-final figures put turnout at 67.7 per cent, just shy of the 70 per cent the Kremlin was reported to have been aiming for before the vote.

Kremlin spokesman Dmitry Peskov played down suggestions that tensions with the West had boosted turnout, saying the result showed that Russians were united behind Putin’s plans to develop the country.

He said Putin would spend the day fielding calls of congratulation, meeting supporters, and holding talks with the losing candidates.

Chinese President Xi Jinping was among the first to offer his congratulations to Putin, but Heiko Maas, Germany’s new foreign minister, questioned whether there had been fair political competition.

French President Emmanuel Macron was one of the few Western leaders to speak by telephone to Putin on Monday, wishing Russia and its people success in modernising the country.

How long Putin wants to stay in power remains uncertain.

The constitution limits the president to two successive terms, obliging him to step down at the end of his new mandate.

Asked after his re-election if he would run for yet another term in the future, Putin laughed off the idea.

Although Putin has six years to consider a possible successor, uncertainty about his future is a potential source of instability in a fractious ruling elite that only he can keep in check.

“The longer he stays in power, the harder it will be to exit,” said Andrei Kolesnikov, senior fellow at the Carnegie Moscow Centre, a think-tank. “How can he abandon such a complicated system, which is essentially his personal project?”