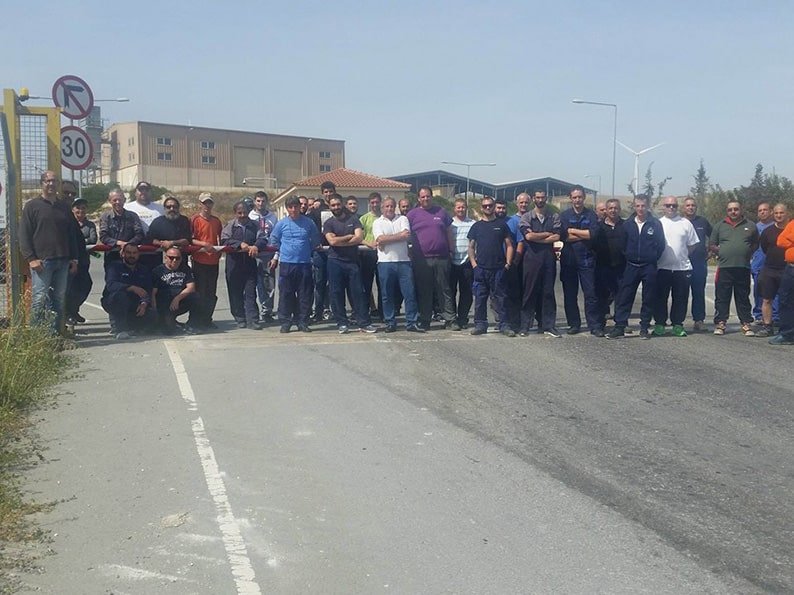 Workers on strike outside Koshi on Monday

Workers at a waste management plant in Larnaca staged a strike on Monday over delays in renewing their collective agreement.

The 80 workers at the Koshi plant decided to strike between 6.30am and 10pm on Monday after the company said it would not be signing the renewal of the agreement that ended in December last year.

In a written statement, the company Helector acknowledged the workers’ concern from the continuing insecurity they have experienced in the past two years.

It said the provisions of the agreement signed in July 2016 were still in force and were fully respected.

“But we consider premature to enter discussions on further amendments, as per union and worker demands, before changes to our agreement with the state are finalised,” the company said.

Later in the day the workers said they would give the company three weeks to sign the collective agreement and if it fails to do so, they will go on an indefinite strike.

The chairman of the board, Aradhippou mayor Evangelos Evangelides said negotiations between the company and the state should have been completed by now.

He said the agreement has been before the tender review board and the Legal Service for the past seven months.

However, the tender board later issued a statement to deny the mayor’s claim, saying there was no agreement before it.

In December 2017, former agriculture minister Nicos Kouyiallis said the government had succeeded striking a deal with the consortium to process greater quantities for around €36 per tonne, instead of the €39.90 agreed earlier in the year by former interior minister Socratis Hasikos.

The agreement will be in force until March 2020 when the existing contract expires.

A renegotiation of the deal was instigated after it emerged that Helector had been overcharging communities to handle their waste.

It has since been charged in and is part of an ongoing trial where public officials have already pleaded guilty to accepting bribes in exchange for looking the other way while Helector overcharged municipalities.