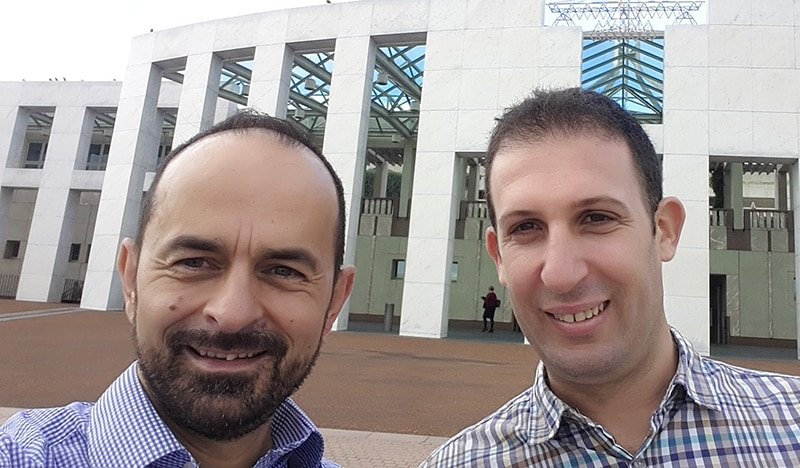 Forty six years ago, in the last years of peace, travel writer extraordinaire Colin Thubron walked round Cyprus. His six-hundred mile trek took in characters and places, architecture and landscape, myth and history, and resulted in the much-lauded Journey Into Cyprus. Today, almost half a century on, two Australia-resident Cypriots are following in his footsteps, embarking on their own, 16-day, 350-km walkabout which will take them from the Karpas Peninsula to the Rock of Aphrodite. But their purpose isn’t simply to record their experiences. These two share a deep love for their birthplace, and a mutual belief in a free and united island; their epic trek is intended to celebrate the cultural diversity and friendship between all residents of the island, as they go on a journey which – they hope – will inspire the next generation and bring peace to a divided nation.

Yalcin Adal and Stavros Georges are quite different: Yalcin lives in Melbourne, Stavros in Brisbane. Yalcin is 50, Stavros some 15 years younger. Yalcin works as a consultant, Stavros owns the Medley Café and Restaurant. But that is as far as the differences go. Both are family men, both love the same food, both were born on the same island – in the same city, even – and both consider themselves, above all, Cypriot.

The pair first met at a reconciliation event in Australia, and bonded over a documentary Yalcin was directing: “I was interviewing Stavros about the myth of the 101st window in a secret room which once belonged to a mythical Queen of Cyprus. The window looks out over paradise, and has the power to grant whatever the viewer desires. Stavros suggested that should he find the mythical window, he would ask that the people of this island would respect one another and that there would be an end to discrimination. And that is something that has resonated with me to this day; we’ve actually made his wish a big part of our journey’s aim – we’re going to be looking for that 101st window along the way!”

“This walk for peace is to inspire others,” Stavros continues. “It’s a gentle approach that shows we are all the same. Even though I moved to Australia at the age of 17, Cyprus is still the most important place in the world to me – it’s home. and I still get homesick for it.” A nature-lover and peace activist, Stavros dreams of one day returning to live in a “culture where all citizens live together in harmony and respect, regardless of background or community. Our goal is not political,” he adds. “We’re doing this to bring about a peaceful future for a place we both love.”

While the main aim of the journey is to inspire reconciliation, the trek will also result in a full-length film – “an afterthought” explains Yalcin, “but it promises to be a great story! All that beautiful landscape, amazing archaeological sites, the flora and fauna of spring in Cyprus: we’re going to be walking through it, taking it in first-hand; it’s an ideal opportunity to document our journey.”

Enthusiasts all over the world have jumped on the idea: an Indian director and crew are now attached to the project and will be following much of the trek; a local hiker has been checking the trails the two will take; and, back in Australia, Yalcin’s nephew is full systems go on the social media front. “Then my parents came out of retirement just to help!” Yalcin laughs. “They’ve been running round Cyprus for the last four months, setting up accommodation, checking film permits, scheduling interviews – they’re having a whale of a time travelling the whole island!”

Setting off from the very tip of the Karpas Peninsula, Yalcin and Stavros will make their way down the coast, skirting Kyrenia and taking in many of the castles along the range. “It’s certainly going to be an adventure!” exclaims Stavros, who admits with a laugh that he hasn’t spent as much time preparing for the physical aspect as his friend. “I play football, and I’m an avid hiker, but quite a few of the days will be seriously gruelling: we’ve got one stretch all the way from Buffavento to St Hilarion, another which starts close to Morphou and ends almost at the peak of Mount Olympus – quite a challenging change in altitude.”

Yalcin, who’s taken his training regime a little more seriously, has been preparing for months for the 25-odd kilometres of each day’s trek. “But even so,” he adds, “it’s going to be interesting. We’re mostly staying with family and friends, the odd Airbnb, but we’ve got daily briefings and scriptings with the film crew before we even start each morning, and this goes on for nine days before we get a break as we enter Nicosia. That, I think, will be the biggest day for both of us…”

After starting on Wednesday, on March 29, the duo enter the town in which both were born. But it’s not going to be all collapsing in exhaustion: the following rest day sees a tree-planting ceremony and soirée taking place at the Home for Cooperation in the evening. The Australian High Commissioner, members of the Cyprus Academic Dialogue (an Australian-sponsored NGO working on peace-building), and all those of the general public who share the walkers’ desire for peace will be in attendance, as Yalcin and Stavros plant an indigenous tree – a contribution from the First Nations People of Australia towards the reconciliation of the island’s communities, including those both walkers were forced to leave behind when they moved halfway across the world.

“We both have family in Cyprus, and they are very important to us,” Yalcin explains, adding that each day of the trek honours those who have been inspirational to the pair throughout their lives, from uncles and aunts to grandparents, cousins, children and even neighbours. “In fact, the majority of our funding has come from family and friends; although we’re paying for much of the journey ourselves, we’ve raised over A$6,000 so far and will definitely reach our A$12,000 goal before we set off. Many of those we know will join us on certain days,” he adds. “Our wives will be there for our final walk to Aphrodite’s Rock; it will be, I believe, highly climactic for all of us. Both Stavros and I share so much love for Cyprus, that the end of this journey is bound to be very emotional.”

Ultimately, what makes this story special is that a Turkish Cypriot and a Greek Cypriot should undertake such an epic walkabout together – a thing that was unimaginable when Yalcin and Stavros’ forebears were growing up on a war-torn island. But, at the end of the day, it’s the similarities that not only drew these two together but will no doubt help them achieve their goal: similarities which the two will celebrate and share as they journey into Cyprus – from east to west, from north to south.

For more information on Yalcin and Stavros’ journey, visit the Facebook page Journey into Cyprus – East to West. To help the pair crowdfund their endeavour, and to discover more about the upcoming documentary, visit the crowdfunding page https://chuffed.org/project/journey-into-cyprus

MEPs ask Greece not to deliver Efimova to Malta (Update 4)

Teens who hide their sexual orientation have higher suicide risk