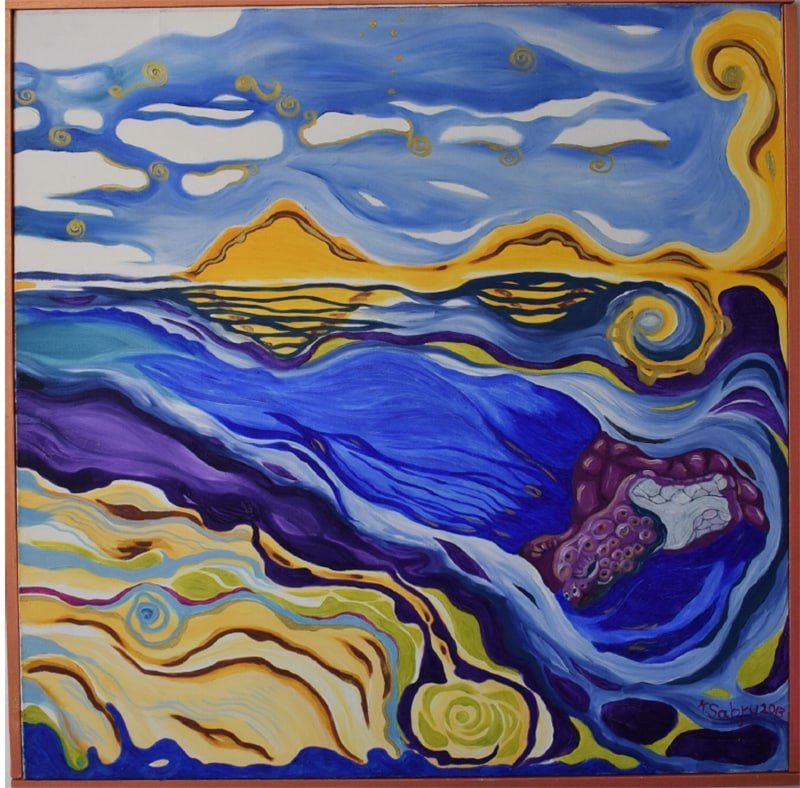 Works by three artists, Vladimir Makeyev from Russia and Zoritsa Zoya Mladenovic and Katie Sabry from Cyprus, will be presented at the Beat Pazar in Limassol on Friday under the name Dreams & and Other Stories for a period of three days.

These three artists create a narrative through their art, which concentrates on love in general, love between people and love of nature.

Makeyev graduated from the Crimean Art School in 1989. He does not limit his work to one genre, so he describes them as colourful philosophical graphics, utilising his main technique of oil on cardboard.

Because his works do not fit into a single genre, it has no limits and can easily illustrate to the viewer Makeyev’s way of thinking, his spiritual standing and his fantasies. Original and figurative worlds are therefore created from these works. These are universes filled with love and light and, although the earthly and heavenly concepts are closely connected, it is evident that spiritual love transcends the physical.

Makeyev, who is the artistic stage director of the WestSide Story musical directed by Leonid Kvinikhidzhe in the Crimean National Theatre, has exhibited his work around the world. He was invited as an honorary artist for a private exhibition at the European Parliament, Strasbourg, France in 2004 and in 2013 he illustrated the book by Oleg Mityaev The Songs. BookThree.

Mladenovic discovered her talent for colours and unusual compositions, such as creating work with textiles on decorative pillows, in primary school. She studied at the University of Law in Belgrade and moved to Cyprus from Serbia with her family in 1991. Her first solo exhibition was at the Limassol Municipal Library in 1997. She has also participated in many group exhibitions and in 2000 she opened a private gallery along with Vera Yudina and Sasha. She continued to develop her own style while also travelling and attending spiritual courses.

Sabry moved to Cyprus when she was only six months old from the Isle of Man. She spent most of her childhood and part of her teenage years in Kyrenia. She also spent some time in England and travelled to many mainland European countries. She studied at the York School of Art, England, the Academy of Fine Art in Rome, the Luciana Notturni Academy of Mosaics in Italy, and the Edinburgh School of Art.

She has been exhibiting her work in Cyprus, Germany and England since 1983. Speaking about her work within the Dreams & and Other Stories exhibition, Sabry said “for this exhibition I have taken elements from two large, and for me, very important paintings. Dream of Memories: are my memories, dreams and thoughts from my childhood in the now occupied area of Kyrenia. The Venetian harbour, a fabulous gothic mountain range, the sea, sky, light, history and my father’s garden.

“I was lucky enough to enjoy a true paradise; huge amounts of freedom to wander, cycle, swim and play on beaches or in the mountains. Having had a lifetime of very vivid and colourful dreams, I draw on those for inspiration, I travel to much loved and missed places, forward and backward, where time as we know it, is nonexistent.”

Handshake with ICT at UNic