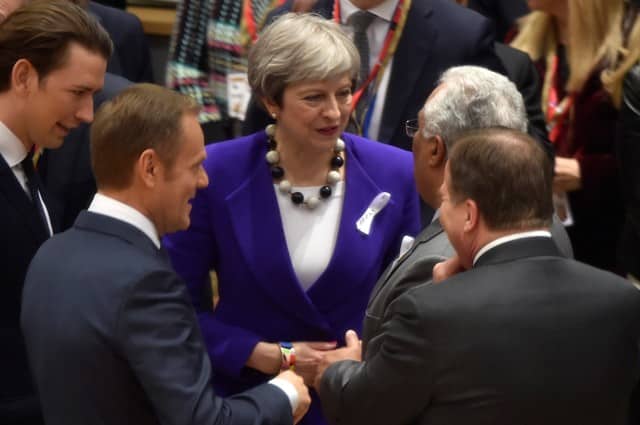 Britain pushed on Thursday to get the rest of the European Union to squarely condemn Moscow over a nerve agent attack on a former Russian spy in England.

Prime Minister Theresa May, also grappling with Britain’s departure from the bloc, is asking European Union states to crack down together on Russian spies that could be preparing similar attacks, diplomats at the EU summit said.

She received strong support from France and Germany but had yet to convince Russia doves to blame Moscow directly over the assault.

“Russia staged a brazen and reckless attack against the United Kingdom,” May told reporters. “It’s clear that the Russian threat does not respect borders and indeed the incident in Salisbury was a pattern of Russian aggression against Europe and its near neighbours.”

May accused Russia of the first known offensive use of a nerve toxin in Europe since World War Two after Sergei Skripal, a former Russian double agent, and his daughter were found unconscious in the city of Salisbury on March 4.

May has expelled 23 Russian diplomats as undercover spies. Moscow, which has denied involvement in the attack, has taken retaliatory steps.

After May met German Chancellor Angela Merkel and French President Emmanuel Macron on the sidelines of the summit, a French government source said the three “agreed to deliver a strong European message in response to Russian actions”.

A British spokesman said they “reaffirmed that there is no plausible explanation other than that the Russian state was responsible”.

Macron, Merkel and U.S. President Donald Trump have already said in a joint statement with May that they share Britain’s assessment of Russian culpability.

EU leaders sparred at dinner over whether to match that language, as they also discussed taking “coordinated action” over the attack. Lithuanian President Dalia Grybauskaite said she was ready to expel Russian spies.

Diplomats said so was another Russia hawk in the EU, Poland. But, with the bloc traditionally split on how to handle Moscow, where President Vladimir Putin secured a fourth presidential term last Sunday, they were waiting to see who else would join.

Slovakia’s new prime minister, Peter Pellegrini, backed a draft summit statement of all EU leaders, which for now only says they take “extremely seriously” London’s assessment that it was highly likely Russia was responsible for the attack.

Greece and Hungary are also reluctant to sharpen the wording over the poisoning of the Skripals, who British authorities say have been critically ill since the attack by a Soviet-produced, military-grade nerve agent called Novichok.

May will also ask fellow European leaders to step up intelligence cooperation to go after Russian spy networks further down the line, diplomats said.

“Britain says there are these networks that organise such things like Salisbury, that these networks exist across our borders and that it would be good to go after them together,” a senior EU diplomat said.

Another diplomat said: “There is movement among several willing states to do something together in reaction to Skripal.” The person added this would be done bilaterally so as not to press more reluctant member states too hard.

Russia’s ambassador to London, Vladimir Yakovenko, on Thursday said that, had Novichok been used, the Skripals would have died. A British judge said separately the attack may have left the Skripals brain-damaged and that it was unclear whether they would recover.

European Council President Donald Tusk, who chairs the summit and has sided with Britain, said the bloc should discuss how to better protect itself from chemical and biological attacks and beef up counter-intelligence.

“Russia has shown itself as a strategic enemy, not a strategic partner,” said a British official, who stressed however that Britain was not seeking new economic sanctions.

Ties between Russia and the West plummeted over Moscow’s 2014 annexation of Crimea from Kiev and support for rebels in east Ukraine. Both have triggered EU sanctions.