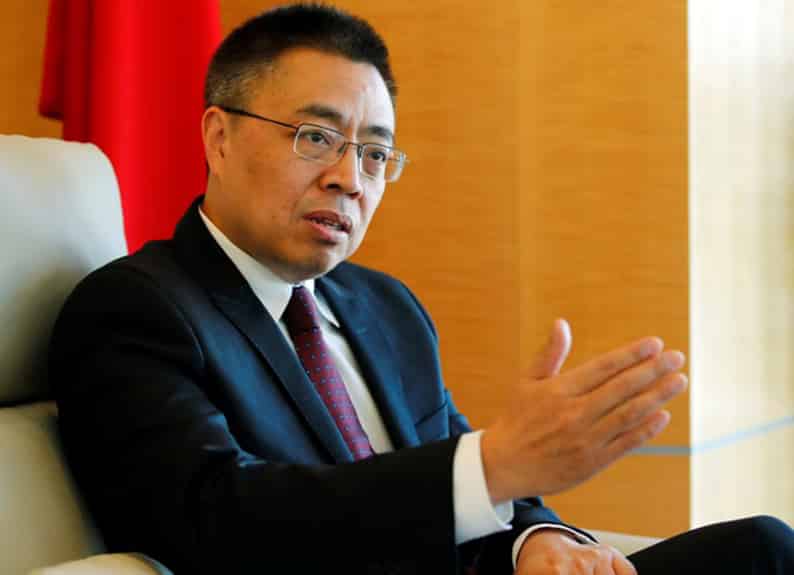 China is preparing a range of responses to planned U.S. tariffs and will stand up to protectionism, but still hopes for dialogue, Beijing’s ambassador to the World Trade Organization (WTO) said on Thursday.

Zhang Xiangchen said China was considering a WTO complaint against the package of tariffs that President Donald Trump was expected to announce later on Thursday.

“This is a legitimate right for China to do that. But I would not exclude other options because, if the flood approaches, you have to bank up to keep it out,” he told Reuters.

Zhang spoke before a senior White House official said Trump would sign a memorandum later on Thursday to potentially slap tariffs on $50 billion of Chinese imports over forced transfer of intellectual property.

The announcement is the first in a string of U.S. trade restrictions to be aimed squarely at China.

U.S. Trade Representative Robert Lighthizer said on Wednesday the tariffs would target China‘s high-technology sector and could also include restrictions on Chinese investments in the United States.

In January, he slapped steep import tariffs on solar panels and washing machines and this month worldwide steel and aluminium tariffs have followed, justified by a claim to “national security” under a Cold War-era law.

Asked about the exemptions, Zhang said that “appeasement of protectionism” would not work. “If you surrender to protectionism, you will lose your credibility.”

The United States hopes that the national security claim will make the steel and aluminium tariffs immune to a challenge, but Zhang said they failed to pass the WTO test of being “essential” for national security.

“No one has seen the essential national security rationale behind the U.S. measures,” he said. “Even the senior officials of the United States fail to hide the real reasons.”

‘A FLAVOUR OF TRADE WAR’

Thursday’s tariffs, under Section 301 of the 1974 Trade Act, would be even more difficult to defend, Zhang said, because in a previous ruling Washington promised to deploy them only with authorisation from the WTO.

“The U.S. commitment is still there. But it seems that today they would like to ignore it. This issue can be brought back to the WTO and it will be challenged again.”

China and other WTO members might also retaliate against the solar tariffs with their own tariffs on U.S. goods, Zhang said.

“My colleagues in the capital have been preparing those options and this response. We still cherish the multilateral trading system very much, although there’s a flavour of trade war in the air.”

Asked about a possible U.S. WTO complaint about currency manipulation, Zhang said Chinahad been prepared for such an argument since Trump mentioned it during his election campaign.

China is already under U.S. pressure at the WTO for its industrial overcapacity and its cyber security law.

As well as deploying tariffs, the United States has undermined the WTO’s ability to cope with disputes by vetoing the appointment of new appeals judges.

“If the United States has the intention to paralyse the system no one can stop this,” he said, adding that China would keep trying to persuade Trump to unblock the system, although some in Geneva were talking about a plan B for the dispute settlement mechanism.

Zhang said he hoped for good relations with new U.S. ambassador Dennis Shea, who he said had promised to discuss the issue, and he did not want to consider a scenario of the WTO without the United States.