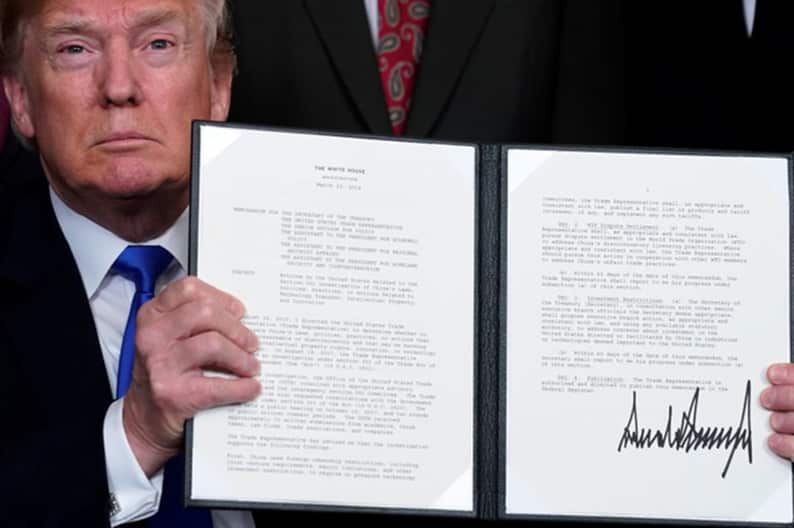 US President Donald Trump signed a presidential memorandum on Thursday that could impose tariffs on up to $60 billion of imports from China, although his action was far removed from threats that could have ignited a global trade war.

Under the terms of the memorandum, Trump will target the Chinese imports only after a consultation period, a measure that will give industry lobbyists and legislators a chance to water down a proposed target list which runs to 1,300 products.

China will also have space to respond to Trump‘s actions, reducing the risk of immediate dramatic retaliation from Beijing, and Trump struck an emollient tone as he started speaking, saying “I view them as a friend.”

“We have spoken to China and we are in the middle of negotiations,” Trump said, adding that loss of American jobs from unfair trade was one of the main reasons he had been elected in 2016.

Washington will also pursue alleged breaches of intellectual property law by China through the World Trade Organization, a body that has repeatedly drawn the ire of the administration but which could provide a resolution that avoids a trade war.

Global stocks had sold off on Thursday on the expectation of tough action from Trump, with US markets down as much as 2 per cent, but recovered somewhat after the announcement.

Following Trump‘s announcement on Thursday, the US Trade Representative’s office will present a list of products that could be targeted, primarily from the high-tech sector. There will then be a 60-day consultation period before definitive action will be put into force.

White House officials told a briefing ahead of the trade announcement that the administration was eyeing tariffs on $50 billion in Chinese goods. They said the figure was based on a calculation of the impact on the profits of U.S. companies that had been forced to hand over their intellectual property as the price of doing business in China.

There was no explanation of the difference between the numbers provided by White House officials in the briefing and Trump‘s $60 billion.

“Many of these areas are those where China has sought to acquire advantage through the unfair acquisition and forced technology transfer from US.companies … establishing its own competitive advantage in an unfair manner,” Everett Eissenstat, deputy director of the National Economic Council, told reporters.

In addition, Trump will also direct the US Treasury to propose measures that could restrict Chinese investments in the United States, Eissenstat said.

The tariffs and investment restrictions will be imposed under the US Trade Representative’s “Section 301” investigation into alleged misappropriation of US intellectual property by China.

Eissenstat said the investigation clearly demonstrates unfair practices by China, which forces US investors to turn over key technologies to Chinese firms.

China to respond to US tariffs, resist protectionism