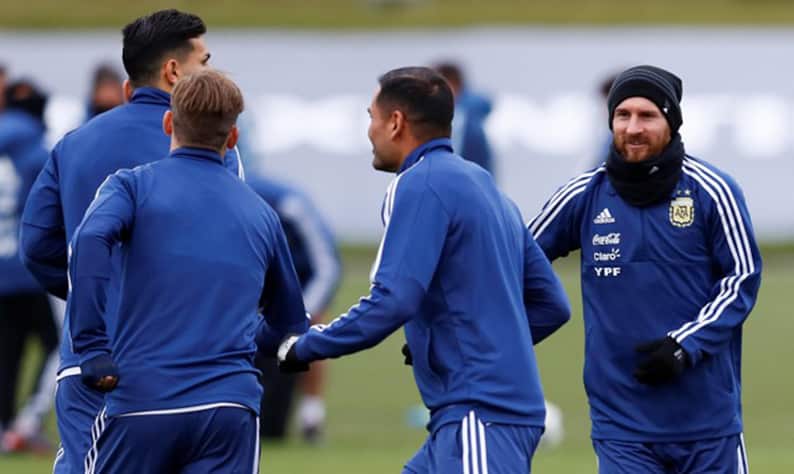 Lionel Messi training with the team

Barcelona talisman Lionel Messi has the talent and maturity to carry Argentina’s hopes of a successful World Cup campaign this year, the national team’s manager Jorge Sampaoli has said.

Five-time Ballon d’Or winner Messi has led Barcelona to 30 domestic and European trophies during a stellar career but is yet to win a major trophy with the national team, apart from a gold medal at the 2008 Olympics.

Argentina finished runners-up to Germany at the 2014 World Cup and to Chile at the 2015 and 2016 Copa America tournaments, and Sampaoli believes that Messi can help the team go one step further and end their trophy drought in Russia.

Messi, who is the all-time top goal-scorer for both club and country, initially announced his retirement from international football after the loss to Chile in 2016 but the 30-year-old has since reversed his decision.

Meanwhile, Manchester City forward Sergio Aguero has been ruled out of Argentina’s friendly against Italy at the Etihad Stadium on Friday due to a knee injury but could return for next week’s trip to Spain.

“We’ve been talking to the doctors here at Manchester City and trying to evaluate his situation to see if he can play any part. It looks like he’ll be sitting out the first one and we’ll see about the second one,” Sampaoli added.

The former Chile boss believes the friendlies against Italy, who failed to qualify for the World Cup finals, and Spain present an opportunity for Argentina to send out a warning to their opponents in Russia.

“Everyone gives us a leading role in the World Cup and my obligation is to increase that, to try to make the rivals fear us even more, today Argentina is very respected,” he added.

Two-time winners Argentina open their World Cup campaign with a Group D encounter against Iceland on June 16, and will also face Croatia and Nigeria in the pool stage.