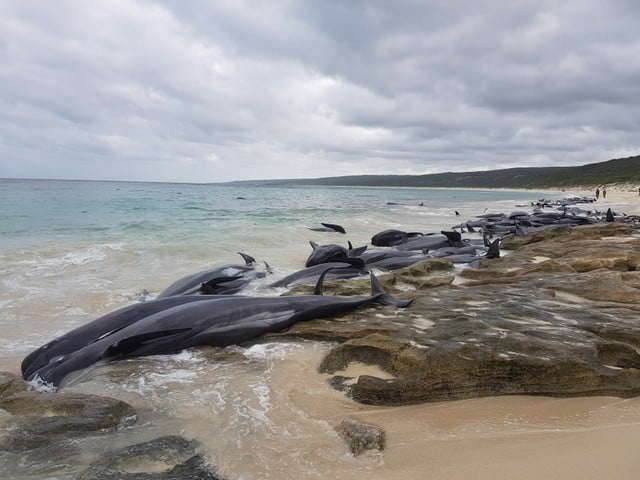 Australian rescuers were racing against time to save 15 short-finned pilot whales on Friday after more than 150 of the migrating mammals beached on the country’s west coast.

Most of the whales had died, said Jeremy Chick, incident controller at Western Australia‘s conservation department, after becoming stranded on dry land overnight.

Authorities and trained volunteers were trying to save 15 in shallow waters.

While whales regularly get stranded on the coastal strip migrating between Antarctic feeding grounds in the south and warmer northern waters where they raise their young, the large number this time is unusual.

Melissa Lay, manager at the Hamelin Bay Holiday Park, told Reuters on the phone that it was the second masse stranding she had witnessed during her 15 years in the area.

“There are some that are still alive but barely,” Lay said. “The last time it happened, none survived.”

Locals and tourists were being warned to stay out of the water due to a likely increase in sharks attracted by the dead whales.

People there for the peak salmon fishing season were also advised to stay out of the shallows.

“It is possible the dead and dying animals will act as an attractant, which could lead to sharks coming close into shore along this stretch of coast,” the Department of Primary Industries and Regional Development said in a statement.

The largest mass stranding of whales in the state occurred in 1996 when 320 long-finned pilot whales stranded themselves just north of Hamelin Bay.