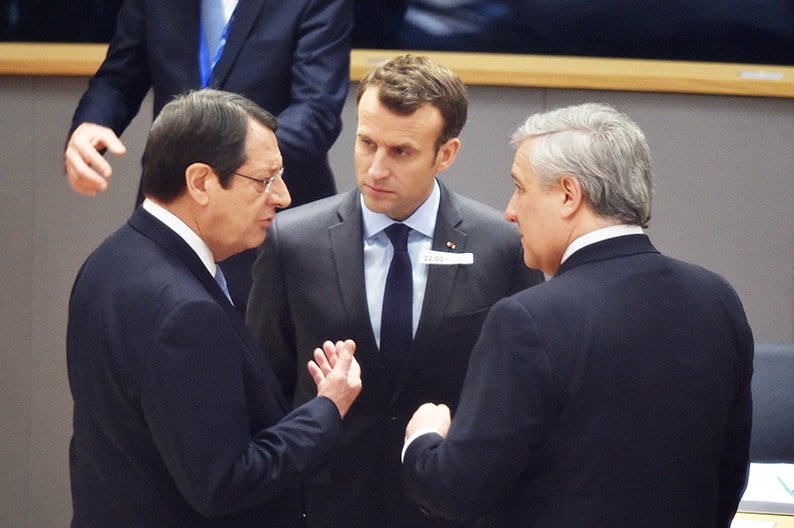 President Nicos Anastasiades on Friday welcomed the strong expression of solidarity from the European Union after the 28 member states called on Turkey to stop all illegal activity in the Republic of Cyprus’ Exclusive Economic Zone (EEZ) and normalise its relations with Nicosia.

Anastasiades, who is in Brussels attending the spring European Council, said this was the first time there had been a clear condemnation of Turkey’s continuing illegal activities in the Eastern Mediterranean and Cyprus’ EEZ by the European Council.

The EU28 said on Thursday they strongly condemned Turkey’s continued illegal actions in the Eastern Mediterranean and the Aegean Sea and underlined their full solidarity with Cyprus and Greece.

“This is the first time that Turkey’s constant illegal actions have being strongly condemned and this is particularly important in view of the Varna summit,” Anastasiades said, referring to the EU-Turkey leaders’ summit planned for Monday in Bulgaria.

The EU28 have called on Turkey to cease all illegal activity in Cyprus’ EEZ and normalise relations with Nicosia.

“Recalling its conclusions of October 2014 and the declaration of September 21 2005, the European Council urgently calls on Turkey to cease these actions and respect the sovereign rights of Cyprus to explore and exploit its natural resources in accordance with EU and International Law,” the European Council said in a statement.

“In this context, it recalls Turkey’s obligation to respect international law and good neighbourly relations and normalise relations with all EU Member States including the Republic of Cyprus,” it added.

The European Council also expressed its grave concern over the continued detention of EU citizens in Turkey, including two Greek soldiers, and called for the swift and positive resolution of these issues in a dialogue with member states.

“In conclusion, the European Council stresses that it will continue to monitor Turkey’s actions,” Anastasiades said.

He said that the most important thing is that the conclusions will be transferred in a unified manner by the President of the European Council Donald Tusk and the President of the European Commission Jean Claude Juncker to those who will participate in the Varna summit in Bulgaria on Monday, and stress to Turkey that for progress on the issues listed on the agenda it should respond both to the conclusions, but also to its obligations as regards Cyprus.

“I want to believe that Turkey will finally realise that if it does not change its tactics and behaviour in line with European standards, I cannot see how much progress can be made in all those that interest herself, the EU and all of us,” Anastasiades said.

Cyprus, he said, is not against Turkey’s European perspective as long as Turkey respects or demonstrates that it respects both European principles and values, as well as the acquis and international law. This, he said, will be to the benefit of all.

“Unlawful acts, unilateral actions, threats and blackmail do not give a prospect for the improvement of EU – Turkey relations, nor do they give any prospect to the efforts made since 2005 for a smooth accession process,” he said.

He said that Cyprus’ desire is for Turkey to understand that it should start thinking and behaving in accordance with its goals.

Turkish Foreign Ministry Spokesman, Hami Aksoy, said following the EU28’s statement, that the EU has completely lost its objectivity on the Cyprus issue.

“As long as this stance is being continued, it is not possible for the EU to be accepted at the third side regarding the Cyprus problem,” Aksoy said.

He said that the statement contains unacceptable expressions against Turkey and has once again served the Greek Cypriot and Greek positions, without taking into account if they are right or not.

“The EU has completely lost its objectivity on the Cyprus issue,“ he said, adding that EU countries are standing behind Cyprus, which acts against international law, unconditionally and without question.

“This is a remarkable situation. While we are trying to create a positive agenda with the EU, of course, there will not be constructive results when the EU takes such decisions,” Aksoy said.

On the Turkey-EU summit in Varna, Aksoy said that they expect a strengthening of the customs union, visa liberalisation and acceleration of financial aid for Syria.

Turkey’s most important demand, he said, is to overcome the political and artificial obstacles in its negotiation process.

Acting director of prisons to stay in post until February 9