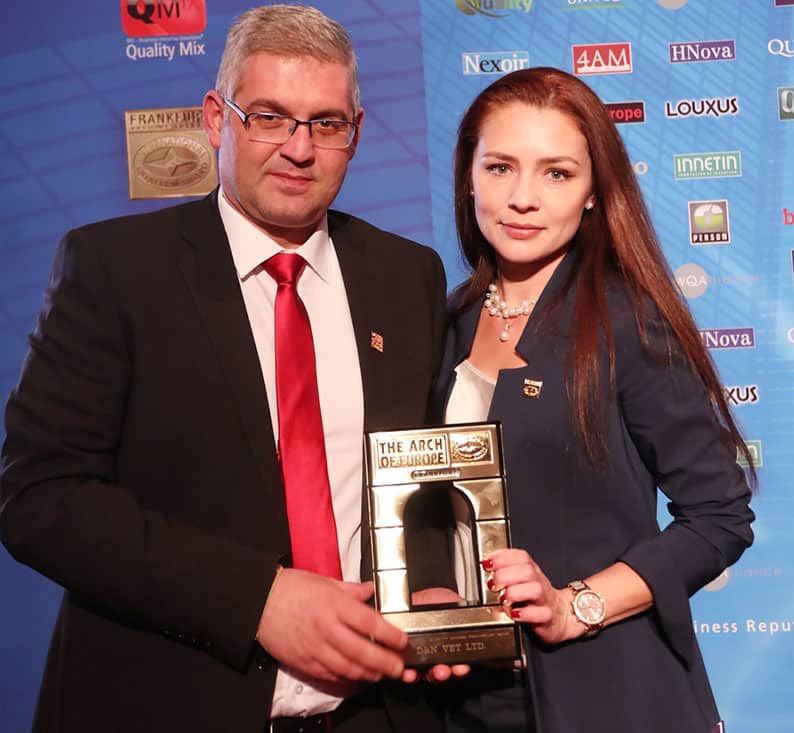 A Paphos veterinary clinic has just been awarded a gold International Arch of Europe award at a ceremony held in Frankfurt, Germany.

The award is given by Business Initiative Directions (BID) and recognises D and N Vets in Paphos for ‘immeasurable contribution to the business world and for high standing and professionalism demonstrated by prestigious performance as well as quality and technology’.

Set up in Paphos in 2004 by husband and wife Dimitris and Natalia Demitriou, the veterinary clinic was awarded at the World BID Congress held on 17 to 18 March 2018 in Frankfurt.

Dimitris told the Cyprus Mail that the pair, who have just returned from Frankfurt, are delighted with their award which means much to both of them.

“I am feeling very proud and we were the only company from Cyprus to be recognised, we were flying the flag,” he said.

He added that the award is an international recognition of the high level of veterinary services provided in Cyprus and the dynamics of the industry in the domestic economy. The couple’s business was evaluated for ten months ahead of the awards, he said.

Natalia added that the award has taken their business ‘to the next level.’

“Our quality and management was recognised and we met so many other businesses from around the world, it was a great experience,” she said.

The event was attended by large companies from around 182 countries active in all sectors of manufacturing and business around the world.

The Business Initiative Directions (B.I.D.) were founded in the US before moving on to Spain in 1986, which then saw them expand across Europe.

Ahead of the gala dinner and award ceremony in Germany, the couple participated in a seminar and spoke about their business, sharing ideas with other awarded ventures from around the world.

“We are the first people in Cyprus to ever win this award and we have also just opened a new clinic in Dali in Nicosia,” Natalia said.

The pair met while studying in Russia a number of years ago. Their love of animals has passed down to their three children, she said.

EU: Trump putting ‘gun to our head’ over tariffs (Update)