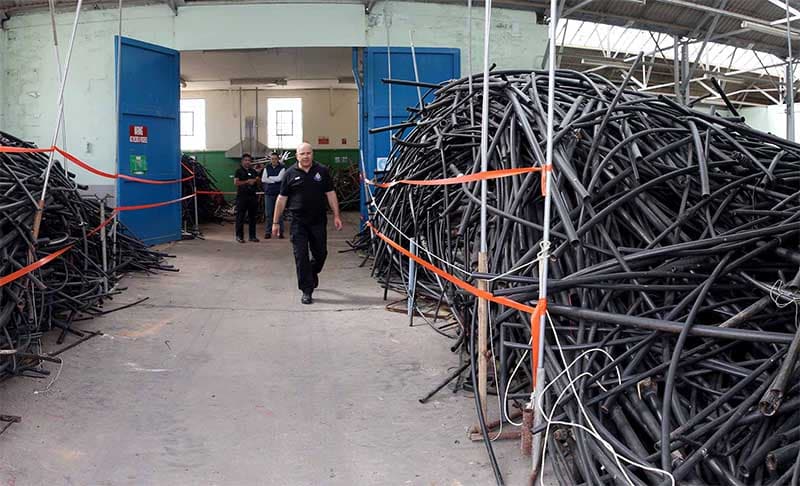 Some of the watering pipes seized

“Bird trapping is not only a cruel and barbaric trade, it lines the pockets of criminal gangs to the tune of thousands of pounds,” he said.

Last year, the number of birds trapped in the SBA fell by 70 per cent, according to the UK’s RSPB, which noted that 260,000 songbirds were trapped.

The previous year’s estimate was of 880,000 songbirds illegally killed to provide restaurants with the local delicacy ‘ambelopoulia’ – a plate of cooked songbirds.

“By seizing and destroying the tools criminals use, we are protecting migratory birds and hitting bird trappers in the pocket.

“And by doubling the number of thermal image drones used to catch the poachers, we will strive for even more positive results.”

More than £40,000 worth of bird-trapping apparatus has been seized, and over a thousand captive birds have been released.

On Friday, SBA police in Dhekelia said they had dealt a blow to bird trappers and highlighted their commitment to stamping out poaching by destroying a large number of mist nets and bird imitating devices, all seized from bird trappers over the past year. In addition, more than 60 kilometres of illegal irrigation pipes were used to support the illegal trapping of songbirds have also been removed.

Dhekelia Divisional Commander Chief Superintendent Jon Ward said there had been a great deal of success achieved by the police and its partners over the past year, but he warned trappers that this was only the beginning.

“The bases authorities are absolutely committed to combating illegal bird trapping within the Sovereign Base Areas (SBAs) and it remains a force priority,” he said.

“Working alongside our military colleagues we have been able to remove a vast sum of illegal irrigation pipes which are used to water acacia trees that hide the mist nets, and we have been able to destroy plenty of bird imitating devices that lure these defenceless songbirds into the traps,” he said.

“With the support from the UK Government we have been able to dedicate more resources to this problem and we are now seeing the rewards of that commitment and that message is reaching the bird trapping community,” he added.

Classical and Byzantine music for Easter