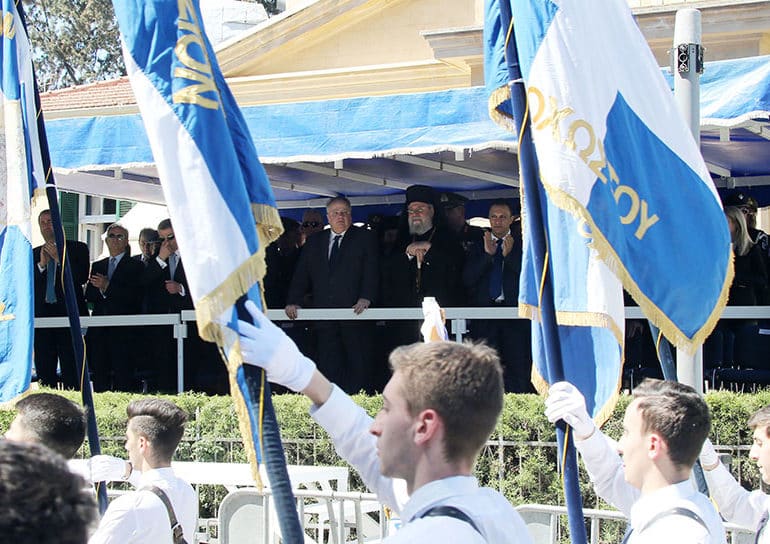 JUST like every year, we will once again be celebrating our two national days on March 25 and April 1 with church services, parades, school festivities, sports events and dances. The high point of all the events will be the pompous, ‘celebratory’ speeches that are repeated every year.

Why, though, does the church participate in the March 25 celebrations of Greek Independence Day, considering it was on the side of the Ottoman rulers and attacked the leaders of the 1821 revolution, using insulting, vulgar, violent and abusive language? Unfortunately, inculcated as part of the myths in our schools, we are not aware of the treacherous role played by the church (church not religion).

Two days before the official start of the revolution, on March 23, the church of the Patriarchate announced the excommunication of the Greek leaders of the uprising. The Greek Orthodox Church excommunicated the likes of Rigas Fereos, Ypsilantis and other leaders of the revolution whom, in its notorious excommunication, it labelled as “arrogant, glory-seeking, vain”. They and their accomplices, said the church’s charge sheet, were “freedom-haters” and attempted a “God-hated and imprudent act”. That act was the liberation of Greece from Ottoman rule, which – according to the church – provided Greeks with “so many privileges of freedom that are not enjoyed by other nations”!

But the “contemptible rebels were shown to be haters of the race, religion and God in order to bring common and general ruin to everyone of the race” (Dokimion Istorikon peri tis Ellinikis Epanastaseos, Vol 2 pages 112 and 3 Rationally, therefore, the church should be in mourning and performing acts of repentance on the anniversary of the revolution, covering church icons in black as it does on Good Thursday and Good Friday, instead of celebrating with special services an outcome it had viciously fought against.

It is also a scandalous omission that no school book never compares the hard lives of the people in Greece and Cyprus with the opulent and decadent lives of the clergy during Turkish rule. Even the deferential author Korais, castigates the “worthless priests” who “transformed the houses of worship into caves of thieves, shamelessly selling mystery, blessings and offerings. They toured the countryside like ravenous wolves, to snatch from the mouths of hungry Christians that little bread, which even the greed of the Turks is ashamed to snatch.”

The national fairytales have no end. Bishop Germanos III of Old Patras, was not the first to raise the flag of the revolution in 1821, rather that was the popular leader Karadzas who was murdered by the Patra citizens for “anti-national” behaviour. The ‘secret school’ – another fairytale – to which children supposedly sneaked, taking all sorts of precautions, did not exist nor had reason to exist as the Ottomans allowed freedom of education, an issue settled for good by historical writings.

As for the recruitment of Janissaries – boys taken from Christian families by force and made to serve in the elite troops of the Sultan – after a certain period it was not done by force. On the contrary, parents wanted their children to enjoy the job security of serving in the elite corps which was of high standing in the Ottoman empire.

National myths surrounding April 1 – Eoka Day – are also well established in the imagination of Cypriot society. The Eoka struggle was not a struggle for “liberation” as it is referred to today, but for “enosis”. The enosis struggle did not entail liberation with its adoption of democratic principles and implementation of human rights. And if we are to be brutally honest, at the start of the 1950s when the enosis referendum was held, Cypriots enjoyed a greater degree of freedom than the mainland Greeks.

The myth that is served all the time in the April 1 speeches and has become established is the refrain that thanks to Eoka’s actions we won our freedom, the presidential and ministerial posts, parliaments and deputies. That would have been true if Eoka had fought for Cyprus’ independence and not for enosis. Independence, with much better conditions than those of the Zurich agreements, we could have secured without the Eoka armed struggle. If, for example, we had accepted the spirt of the 1948 conference very possibly today we would have an independent Cyprus, with Turkish Cypriot representation in accordance to their population, without separate majorities, power of veto and guarantor powers.

Are all these myths served up perhaps at the instigation of the education ministry to cover up the miserable ending of the struggle for enosis? Because the bitter truth suggests that the root cause of the 1974 tragedy, which was comparable to the Asia Minor disaster of 1922, was the pursuit through military means of an unattainable target – enosis. In view of this calamity, how can we justify the church services and parades?

This anniversary should have been a day for reflection. We should consider that the desire for enosis was neither long-standing nor inherent. It was cultivated by the church because it served its financial interests, particularly after the 1946 municipal elections in which the Left triumphed. The discernible possibility of secularisation and the end of its privileges made the church turn to enosis and reject without discussion every proposal for independence, regardless of how favourable it was to Hellenism in general.

Tales from the Coffeeshop: Cypriot tragedy at the co-op

Our View: Have we learnt nothing from the disaster of five years ago?