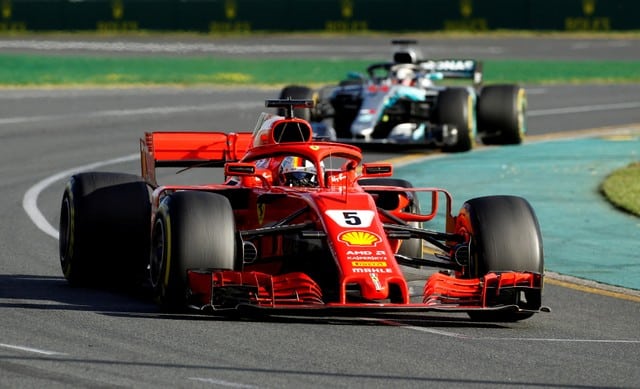 Sebastian Vettel made full use of the virtual safety car to sneak in front of Lewis Hamilton midway the race before the German held off the frustrated Briton to win the season-opening Australian Grand Prix on Sunday.

The Mercedes engine’s infamous ‘party mode’ that delivered Hamilton a record seventh pole position in the Australian race on Saturday could do little once Ferrari’s Vettel had nosed ahead of him after he re-entered from pit-lane.

In another bonus for Ferrari, Kimi Raikkonen finished third, fending off Red Bull’s Daniel Ricciardo and leaving the unlucky Australian still searching for a first podium in his home race.

The race turned on its head when the virtual safety car was deployed after Romain Grosjean’s Haas rolled to a halt at turn two after 24 laps.

Vettel grabbed his chance to pit as a fuming Hamilton was forced to lower his speed, allowing the German to capitalise on being able to run faster in the pit-lane as he rejoined the race just in front of the reigning champion.

In a nerve-shredding duel, Vettel summoned every inch of his race craft to keep the faster Mercedes car at bay.

The tension grew steadily higher and with 10 laps to go, Hamilton blinked, a mistake at a corner causing him to slide into the grass and blow out Vettel’s lead to nearly three seconds.

The relentless Briton doubled down the pressure, however, and within a handful of laps was again within striking distance, but Vettel gamely held on and claimed his second successive win in the Australian season-opener.

“We got a bit lucky obviously with the safety car but yeah, really enjoyed it,” Vettel told former team mate Mark Webber at the podium ceremony.

A weekend that begun positively for Haas with a strong showing in qualifying turned to dust when both Kevin Magnussen and Grosjean ground to a halt with reliability problems in quick succession.

They were among five cars that failed to finish the eventful opener.