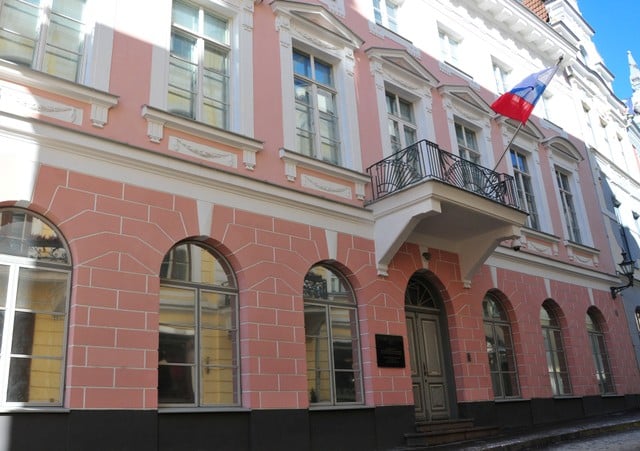 Russia's Embassy in Tallinn, Estonia. Russia's ambassadors to Poland, Latvia, Lithuania and Estonia were summoned to the foreign ministries of those countries on Monday

European Union governments were set to make good on a threat to punish Russia for a nerve agent attack in Britain they blame on Moscow, with Baltic governments expected to expel Russian envoys on Monday, diplomats said.

Moscow has denied it is behind the attack earlier this month on former Russian double agent Sergei Skripal and his daughter, the first known offensive use of a nerve toxin in Europe since World War Two, and has accused the bloc of a campaign against it.

But EU leaders last week said evidence of Russian involvement presented by British Prime Minister Theresa May was a solid basis for further action and the bloc’s top diplomat held consultations with the EU’s recalled Moscow envoy on Sunday.

One senior EU diplomat told Reuters about a dozen countries are expected to expel Russian diplomats on Monday over the attack in Salisbury, England, including the Baltic nations who were once part of the Soviet bloc and who typically take the toughest line on Russia.

Skripal, 66, and his 33-year-old daughter Yulia were found unconscious on a public bench in the English city on March 4 and a British court has since said they may have suffered brain damage by the attack which British authorities said was carried out by a Soviet-era military-grade nerve agent.

Lithuania and Latvia both summoned Russia’s ambassadors on Monday, their foreign ministries said, without giving more details, while the Estonian government plans a separate news conference later in the day on the issue.

Russian news agencies reported that Russia’s ambassadors to Poland, Latvia, Lithuania and Estonia were summoned to the foreign ministries of those countries on Monday.

While EU governments initially hesitated in condemning Russia, the bloc’s biggest energy provider, they have rallied round Britain in recent days in a show of support for London despite its decision to leave the European Union.

British Defence Secretary Gavin Williamson hailed that support on Monday during a visit to Estonia, where Britain has troops as part of a NATO mission to deter Russia following its seizure of Ukraine’s Crimea in 2014.

“The fact that right across the NATO alliance, right across the European Union, nations have stood up in support of the United Kingdom … I actually think that is the very best response that we could have,” Williamson said.

Asked about the expected diplomatic expulsions, a spokesman for Prime Minister Theresa May said the decisions were “obviously a matter” for individual EU governments.

A Lithuanian intelligence service report published on Monday said a third of Russia’s diplomats in Lithuania were spies working under diplomatic protection.

“This way we will say, we know you’re here, we know who you are, we know what you do, and that is why we are expelling you,” Grybauskaite said on Friday.