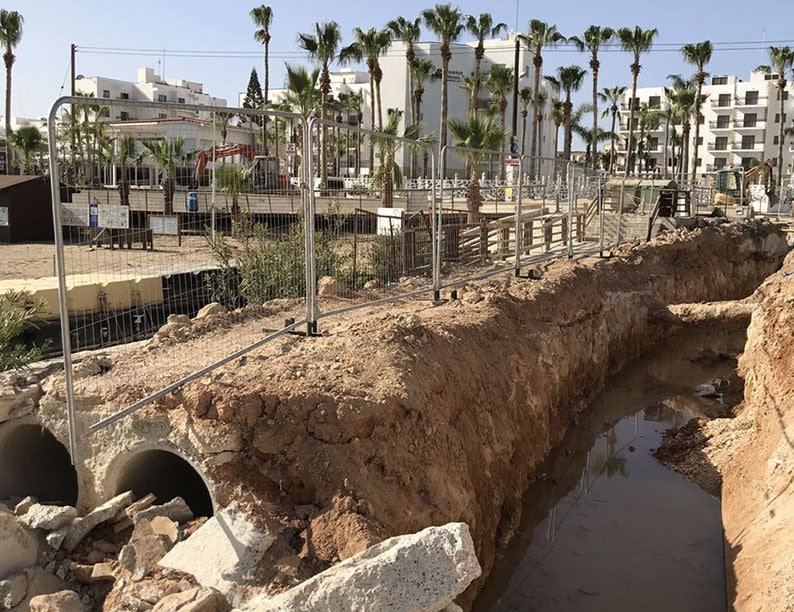 Competent state services will decide which is the best way to complete works already begun on Pernera beach for the installation of rainwater drains (Photo: CNA)

Environment Commissioner Ioanna Panayiotou on Tuesday welcomed the decisions taken during a meeting at the interior ministry aimed at clamping down on beach illegalities.

She said the decisions were a step in the right direction.

One of the decisions taken was appointing inspectors to monitor and report unauthorised activities by local authorities and others.

Interior Minister, Constantinos Petrides, announced on Monday after a meeting convened following the uproar caused by interventions in Protaras beaches by the Paralimni municipality, that 12 officials had been designated as beach inspectors tasked with reporting any illegal interventions for immediate measures to be taken.

Petrides said that it was decided that there would be strict enforcement of the law on the protection of beaches where unauthorised interventions are reported.

“Written complaints will be immediately filed with the police by the district administrations concerned, who will be able to intervene to stop the illegal work immediately,” Petrides said.

He stressed that coordination with the police for dealing with interventions is particularly important as procedures followed so far have proven in some cases ineffective.

As regards recent works in Protaras beaches, he said, all illegal activities have come to a halt.

Competent state services will decide which is the best way to complete works already begun on Pernera beach for the installation of rainwater drains.  “At the same time, any other works stopped and in the event of interventions, the district administration will intervene in cooperation with the police,” Petrides said.

As regards Konnos beach, he said that stream water causes sand erosion each year and it was decided, after onsite inspection, that all that remains is for sand to be laid on the beach.

“At the same time, for the future, a study by the competent state departments will be carried out for the most radical and environmentally appropriate solution on the matter,” he said.

Works at Skoutari beach have ceased, he said, and legal procedures are underway, as “based on the ruling of the legal services works were in violation of the permission granted by the district officer”.

Petrides said that works carried out in the past in Sirena Bay and Vrisouthkia beach in Paralimni were legal and took place after studies had been carried out.
“Works on beaches should be done for both beach protection, to facilitate the public, and sustainable development, but they are always to be done on the basis of legal procedures and taking environmental considerations into account,” Petrides said.

Panayiotou said on Tuesday that the decisions taken were in the right direction.

The aim, she said, ought to be to develop sustainable tourism by integrating all environmental criteria into the management practices of the beaches. Panayiotou also said that there is absence of a national strategy for beach management, which make matters worse, especially in relation to legislation gaps.

“The draining of wetlands, sand mining, building hotels, the creation of marinas and ports without conducting detailed environmental studies, are just some examples that result in the destruction of many marine habitats within the coastal zone and the erosion of the coastline” she said.

Interventions by municipalities and communities on beaches do not contribute to the sustainable development of our beaches at all, Panayiotou said, as they are aimed only to serve as many visitors as possible, ignoring preservation of the natural environment.

On Tuesday representatives of the Famagusta District Administration, the Cyprus Tourism Organisation, the environment department, public works, the mayor and municipal councillors of Paralimni visited the Konnos and Pernera beaches, to decide on the best way to complete the works.

Paralimni Mayor Theodoros Pyrillis who came under fire last week after photos and videos circulated on social media of bulldozers on the area’s beaches, insisted that everything was being done according to the law and defended the right of his municipality to carry out earthworks on beaches within its jurisdiction.

He added that he agrees with the measures announced by the minister for the introduction of a single policy on the management of the island’s coastline.

Pyrillis said however that his municipality has been targeted by some who used social media to turn the public against them, aiming to serve private interests.

He called for the completion of works that were halted as the summer season is near and thousands of visitors are expected to arrive. “It is not right for them to see the existing situation,” he said.

Pyrillis said the municipality decided to stop works out of respect for the interior ministry and the government. He said that they have also asked the ministry to appoint three inspectors to monitor beaches in the night time as many private individuals also make illegal interventions on beaches.

Paphos mourns the death of Greek writer and director