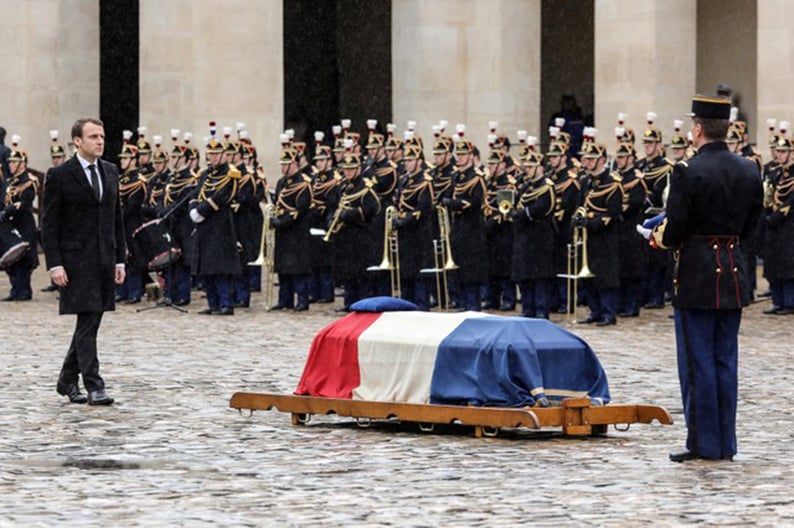 French President Emmanuel Macron walks towards the coffin Lieutenant-Colonel Arnaud Beltrame, draped with the national flag at the Hotel des Invalides in Paris

President Emmanuel Macron led national tributes on Wednesday to the gendarme who switched places with a woman hostage during an attack on a supermarket in southern France last week and was killed by the Islamist gunman.

Colonel Arnaud Beltrame’s heroism has helped reassure a nation left shaken and in mourning after Moroccan-born Radouane Lakdim’s killing spree, an attack that rekindled a debate over how France deals with suspected militant Islamists.

Tributes began with a minute’s silence in gendarme barracks across France, before Beltrame’s Tricolor-draped coffin was carried into the cobbled courtyard of Les Invalides, a former military hospital, where Macron solemnly addressed the nation.

“To accept to die so the innocent can live: that is the essence of what it means to be a soldier,” he said. “Others, even many who are brave, would have wavered or hesitated.”

More than 240 people have been killed since early 2015 in France in attacks carried out by Islamist militants or individuals inspired by Islamist groups. Macron said France would prevail with calm against an “insidious enemy” that wanted to divide the French people and deprive them of their freedoms.

Lakdim’s rampage began when he shot dead the occupant of a car he stole and fired on a group of police joggers, wounding one. He then headed to a supermarket in Trebes, east of the popular medieval tourist city of Carcassonne, where he killed an employee and a customer.

Beltrame, 44, led the team of gendarmes who arrived first on the scene. He persuaded Lakdim to release a woman he was holding as a human shield, laying down his weapon and putting his mobile phone on a table with the line surreptitiously left open.

When three shots later rang out, elite police stormed the building and shot dead Lakdim. Beltrame was found with bullet wounds to an arm and foot and a grave knife wound to the neck. He died the following morning in hospital.

Colleagues of Beltrame have paid tribute to the gendarme’s sense of duty, calmness under pressure and a generosity which inspired those serving beside him.

The attack has once again exposed secular France‘s struggle to integrate Europe’s largest Muslim community and deal with the threat posed by home-grown militants and foreign jihadists.

“What we are fighting is clandestine Islamic fundamentalism, which spreads through social media, which does its work out of sight, which preys on weak and unstable minds, and which on our soil corrupts and indoctrinates on a daily basis,” Macron said.

Lakdim had been on a government watch list – known as Fiche S – since 2014, suspected of links to a local Salafist network. But he had recently received a summons from the DGSI spy agency and was to be informed he was no longer viewed as a security risk, Interior Minister Gerard Collomb said.

Friday’s attack was the first since Macron, in power since May, toughened security laws and lifted a two-year state of emergency. Right-wing political opponents have pressed Macron to deal firmly with radical preachers and Salafist mosques.

Macron has pledged to redefine relations between Islam and the state to foster a more homegrown form of Islam that would better fit with France‘s firm separation of church and state.

Far-right party leader Marine Le Pen and opposition leader Laurent Wauquiez have both called for foreigners on the Fiche S list to be expelled and the most dangerous French nationals on the watch list to be imprisoned.

“We must fight our battle within the bounds of the law,” Philippe told lawmakers on Tuesday.

Corey Feldman has been stabbed