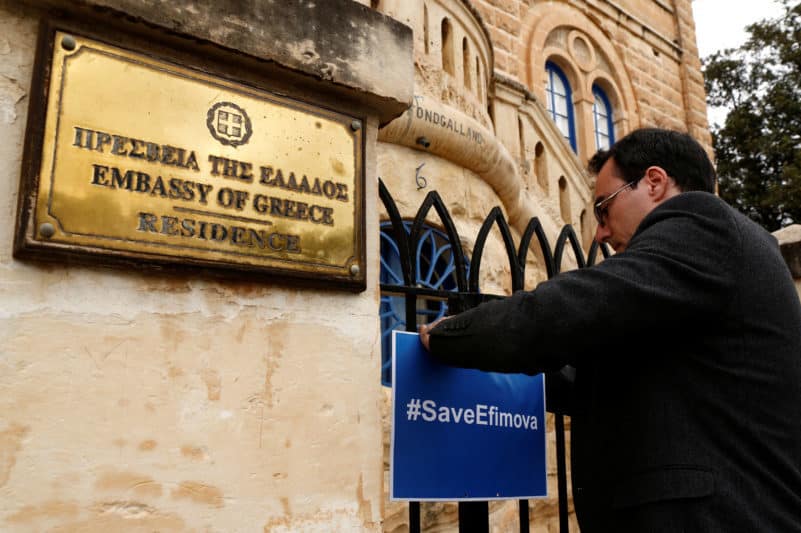 A man attaches a placard to the fence of the Greek Embassy as civil society activists call on the Greek government to grant political asylum to Maria Efimova, a Pilatus Bank employee who ignited a political scandal in Malta when she became a source for investigative journalist Daphne Caruana Galizia who was murdered last year, in Ta' Xbiex, Malta March 27, 2018. REUTERS/Darrin Zammit Lupi

“We had no involvement,” Nicolaou said in a text message on Monday and added that Cyprus decided to tolerate the move.

He added that Cyprus’ arrest warrant, issued late last year after a complaint filed by a Russian-owned, Limassol-based company for which Efimova had worked until 2014 in relation to an alleged embezzlement of funds, had not been rejected by Interpol.

On Tuesday, activists gathered outside the Greek embassy in Ta’ Xbiex, a town near the island’s capital Valetta, to demand that Efimova, a Russian national, be granted asylum in Greece as she is facing extradition to Malta. The protestors were holding placards reading #SaveEfimova.

The central Mediterranean island-state’s authorities issued a double arrest warrant against her for an alleged embezzlement of €5,000 and defamation of officials. In an interview in January, Efimova, a mother of two, said she left Malta fearing her life and that of her family was at risk two months before a bomb planted in Caruana Galizia’s car killed her on October 16.

The journalist had six months previously reported a transfer of funds from an account belonging to a daughter of Azeri president Ilham Aliyev at Pilatus Bank to a Panamanian company belonging to Michel Muscat, wife of the Maltese prime minister Joseph Muscat. The couple denies any wrongdoing. The Iranian chairman and owner of the Bank, Ali Sadr Hashemi Nejad, was arrested by US authorities on the same day Efimova walked into a police station in Athens.

“The warrant was withdrawn by the secretariat of Interpol; the warrant was not rejected because it was not submitted for approval,” the justice minister continued.

Last week, Alexandros Papasteriopoulos, the lawyer representing Efimova, said Interpol had rejected Cyprus’ attempt to turn a national arrest warrant against Efimova into a European warrant as it considered it “too political”.

The lawyer, who cited a communication with the department of international cooperation of the Greek police in Athens, said that Cyprus’ attempt to have an international arrest warrant issued against Efimova may date back to 2014 before another attempt was made in 2017.

Papasteriopoulos said that Efimova is not eligible for asylum as she is not facing politically motivated prosecution at home.