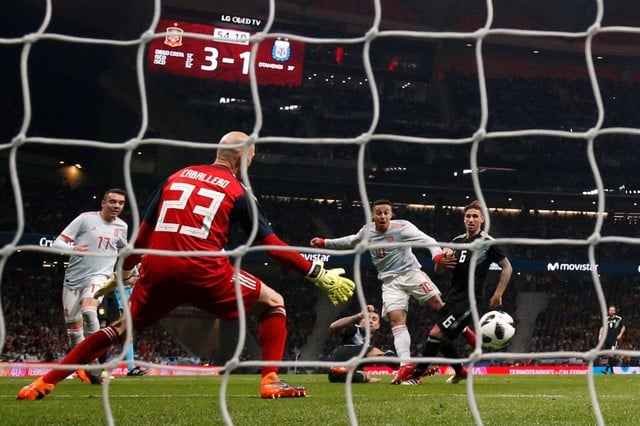 SPAIN 6 ARGENTINA 1
Spain sent out a warning to their World Cup rivals as Isco grabbed a hat-trick in a 6-1 thrashing of Argentina, who were missing the injured Lionel Messi, in a friendly on Tuesday.

On what was supposed to be a historic night for Argentina captain Javier Mascherano, who joined Javier Zanetti on 142 caps as his country’s record appearance holder, things quickly turned sour as Diego Costa, Thiago and Iago Aspas also found the net.

It will have made uneasy viewing for coach Jorge Sampaoli and emphasised more than ever how reliant his side are on their talisman Messi, who has been struggling with a muscle problem.

Should the Barcelona forward be missing at any point during this year’s finals in Russia, Argentina are likely to struggle judging by their meek surrender in the Spanish capital.

Without Messi on the pitch there was room for someone to take the game by the scruff of the neck and Real Madrid’s outstanding Isco filled the void.

The diminutive midfielder dictated play from the centre of the pitch throughout as Spain ruthlessly and consistently exploited the high Argentine defensive line.

“I’m not going to discover anything else about how much I like Isco and having him here with us,” Spain coach Julen Lopetegui said.

“We’ve beaten a team with a strong history who got to the final of the last World Cup. Obviously, once we’re there you start from scratch and they had a couple of important absentees but we’re happy – it’s a real match and a deserved win.”

Argentina might have taken the lead in the opening five minutes, but striker Gonzalo Higuain volleyed wide from close range which was an omen of things to come.

Costa then bravely prodded in from close range after 12 minutes, despite being clattered by goalkeeper Sergio Romero. Both players required lengthy treatment and eventually left the pitch at different stages.

Romero’s replacement, Chelsea back-up Willy Caballero, who starred in Friday’s 2-0 win over Italy, suffered a nightmare. A wayward pass with his first touch saw Isco gleefully sweep home Spain’s second in the 27th as they threatened to run riot.

Defender Nicolas Otamendi briefly offered the visitors hope as he towered above the defence to nod in before the break.

But after the restart it was again all Spain with haphazard goalkeeping and defending all contributing to a procession for the former world champions, who condemned Argentina to their heaviest defeat since a 2009 loss by the same score to Bolivia.

ENGLAND 1 ITALY 1
England were held to a 1-1 draw by Italy after Lorenzo Insigne netted an 86th-minute penalty, awarded by the Video Assistant Referee (VAR), on Tuesday to take the edge off what had been a highly satisfactory World Cup build-up week for the hosts.

England went ahead in the 26th minute with a fierce shot by Jamie Vardy and, following their 1-0 win in the Netherlands on Friday, looked on course for another big scalp and a sixth consecutive clean sheet without ever really hitting top gear.

Italy, in rebuilding mode after a shock failure to qualify for this year’s World Cup, saw three good early chances missed by Ciro Immobile and looked to be falling to a second successive defeat after their toothless 2-0 loss to Argentina on Friday.

However, the referee then consulted the VAR to rule that James Tarkowski had tripped Italy substitute Federico Chiesa, leaving Insigne to lash home the spot kick at Wembley.

GERMANY 0 BRAZIL 1
Brazil edged past world champions Germany 1-0 in their international friendly on Tuesday to snap their opponents’ 22-match unbeaten run and exact some measure of revenge for their 2014 World Cup semi-final humiliation.

Gabriel Jesus headed in the winner in the 38th minute as Brazil, beaten just once under coach Tite and missing injured talisman Neymar, beat a second-string German team to restore some pride after their 7-1 loss to the Europeans four years ago.

The Germans were hoping to match their record of 23 games without defeat but they lacked their usual spark, with several key players injured or rested, including Manuel Neuer, Mesut Ozil and Thomas Mueller.

Germany coach Joachim Loew made seven changes to the team that drew 1-1 against Spain on Friday as they prepare for a World Cup title defence in Russia in June.

Our View: Fences mended in Varna but nothing more