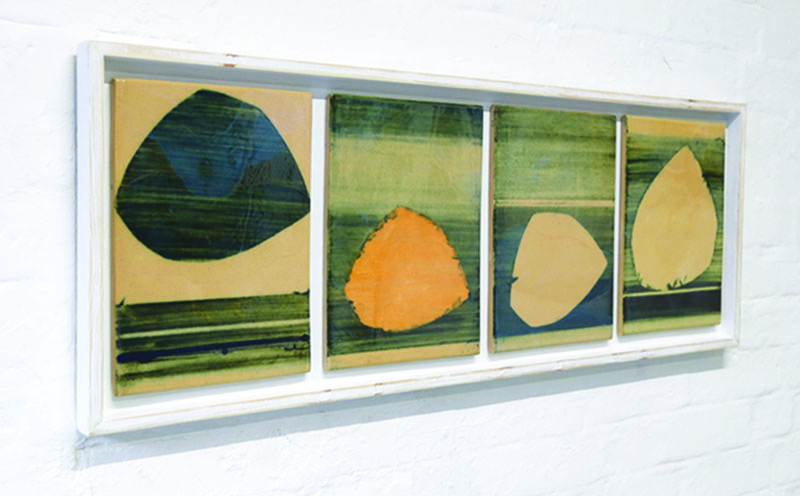 Two exhibitions are on the horizon in Nicosia. The first, ‘Inside Looking Out’ by Frixos Papantoniou, will open this evening at Gloria Gallery and the second, ‘Common Territories’ by Simon Pruciak and Alexandra Reddaway, will have its start tomorrow at Loukia & Michael Zampelas Art Museum.

The painting exhibition by Papantoniou is very much influenced by what is happening around us, the times we live in and the space in which we find ourselves. These elements, as Papantoniou says, have a strong impact on our emotions and behaviour.

“Strong feelings such as pride, identity, confusion and sometimes fear give us the energy to bring out the fire inside to create these results,” he explains. The works showing in this exhibition explore these feelings with a variety of approaches and mediums. The majority of the exhibits are ceramics. The works were made from basic clay, shaped and fired, then metal oxides were used to create colour, then they were re-fired and glazed for the final presentation. This earthy method used by the artist brings us in much closer contact with the environment around us, helping us to understand and appreciate the quality and importance of the space in which we live. Also included in the exhibition are a number of limited-edition linocuts. Images have been created by using found materials to etch the linoleum before it is printed.

The painter goes on to say that, although the subjects of his works are personal, he does not want to instruct viewers on what to think, but to allow them to go on their own personal journey and gain new experiences.

Papantoniou studied Fine Arts at Kingston University and at the Institute of Education, University of London. Although he has made London his home and workplace he remains in very close contact with Cyprus, where he regularly exhibits his work. Based in East London, Papantoniou has exhibited widely throughout the UK, Germany, US, Greece and Cyprus in solo and group shows. His work received awards at the Sefton Open exhibition in Southport and at Fresh Art, Islington Business Centre in London. In 2013 he was one of the three finalists at the annual Pride in the House exhibition at Lauderdale House, Hampstead, and in 2016 an exhibition of his work was organised at Europe House, London by the Cyprus High Commission, under the auspices of the High Commissioner in the UK Euripides L. Evriviades.

His work is included in a number of collections including those maintained by the London Arts Council, the Cultural Services of the Ministry of Education, Cyprus, and the American College of Greece, as well as numerous private collections.

The second exhibition to open this week will present a research project that came about after a year-long journey that artists Pruciak and Reddaway took in 2016. This journey took the pair around the world. It started in Brazil and, having travelled 45,000km across 40 countries and four continents, the couple successfully completed a full circumnavigation of the planet.

After the journey was complete, an idea for a research project was born that would explore boundaries, both artistic and geographical, through the crossing of frontiers of diverse cultural contexts. The aim was to establish a discussion on both the differences and commonalities of territories in a cultural and physical landscape.

The project was supported by the University for the Creative Arts in the UK, and the pair mapped out their journey along modern and historical trade routes. By studying these routes, we can learn a lot about the interactions between trading regions, and about the catalysts for economic expansion or financial decline.

The work to be displayed will explore the surfaces of the trade routes and the travellers’ journey along them, uncovering both the familiar and spectacular on these distant landscapes.