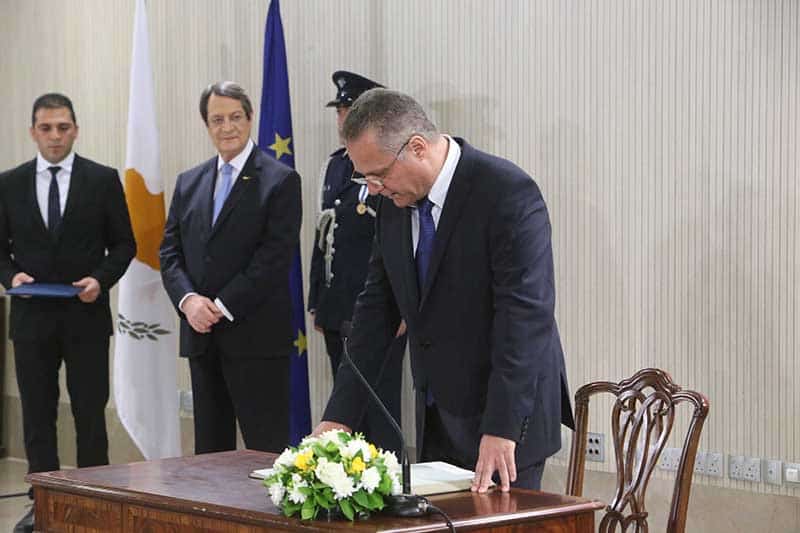 A meeting between Education Minister Costas Hambiaouris with far-right party Elam sparked outrage on Wednesday, especially after he said they had shared values.

The meeting was part of a round of introductory talks with political parties after taking office earlier this month.

Hambiaouris had visited Elam for a meeting with party leader Christos Christou.

The two discussed the problems plaguing the education sector, according to Christou, with the minister saying the two would stay in touch.

“Your opinions are always well received and we are always open for dialogue,” Hambiaouris said.

Hambiaouris did not specify what common values and principles he had with the far-right party.

Main opposition Akel said in any other country a minister visiting the offices of a neo-fascist party – whether in parliament or nor – and making such comments, would have already been sacked or resigned.

Party spokesman Stefanos Stefanou added, however, that they were under no illusion about what President Nicos Anastasiades would do.

“We have not been used to such sensitivities by Mr. Anastasiades. During his first term he overlooked various issues whistling indifferently,” he said.

Stefanou said the president and his entire administration must tell people what principles and values they share with Elam, the people who identify themselves as nationalists, national socialists, and the spawn of the losers of 1945, the Nazis.

Commentators on social media blasted the minister for even agreeing to meet Elam, which a lot of people consider neo-Nazis, a branch of Greece’s Golden Dawn whose members are currently on trial for participation in a criminal organisation after the murder of rapper Pavlos Fyssas in September 2013.

Elam’s chairman, MP Christos Christou publicly said they were Cyprus’ Golden Dawn and the only reason they did not have the name was that the interior ministry had refused to allow it when they applied to register as a political party. Christou had served as a bodyguard of Golden Dawn leader Nicos Michaloliakos.

The minister sought to clarify things later on.

“In my statements today, I referred to the national ideals and the Christian values of Cypriot Hellenism, always with full respect to other religions, without of course implying any association with extreme political ideologies,” he tweeted.

That did nothing to stem the wave of protests. People called for his resignation or dismissal, others posted photos of at least one Elam member — spokesman Geadis Geadi — giving the Nazi salute to show the minister the party’s values.

“Which one? Racism? Fascism? Nationalism? Probably all together … The education minister confirms that he is the archbishop’s choice, who anyway considers ‘the Elam lads misunderstood with crystal clear positions,’” one Twitter user wrote.