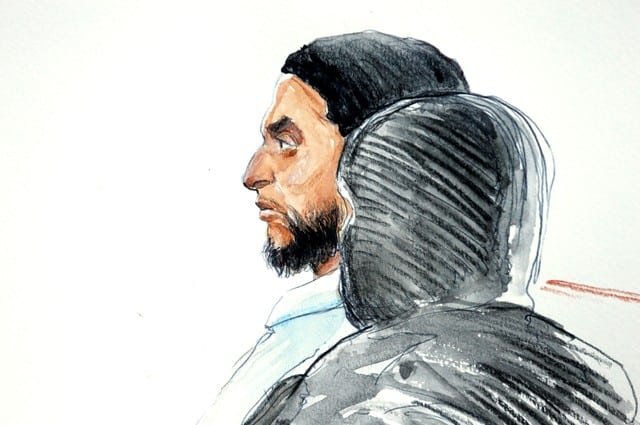 A court artist drawing shows Salah Abdeslam, one of the suspects in the 2015 Islamic State attacks in Paris, in court during his trial in Brussels

The prime surviving suspect in the 2015 Paris attacks will face a verdict on April 23 in a separate case involving a shootout in Brussels in 2016, a Belgian court said on Thursday.

Salah Abdeslam is being held in France for his alleged role in the November 2015 killing of 130 people in Paris by Islamic State militants. He was also charged with attempted murder over a shootout that occurred days before his arrest in Brussels and IS suicide bombings in the Belgian capital in March 2016.

He faces up to 20 years in jail over the shootout in which several police officers were wounded.

Abdeslam was taken under heavy security from France to Brussels to appear at the first session of his trial, there where he declined to testify. He was not present at subsequent sessions, and his lawyer argued he should be freed because of procedural mistakes by Belgian prosecutors.

His co-accused, Tunisian Sofien Ayari, said he and Abdeslam were in a Brussels apartment when police arrived, but that neither opened fire. A three-hour siege ended with marksmen killing Mohamed Belkaid, a 35-year-old Algerian, by which time Abdeslam and Ayari had fled. The two were apprehended a few days later at a flat in another district of Brussels.

Belgian police said they found an arms cache, an Islamic State flag and Abdeslam’s DNA in the first apartment where the shootout occurred.