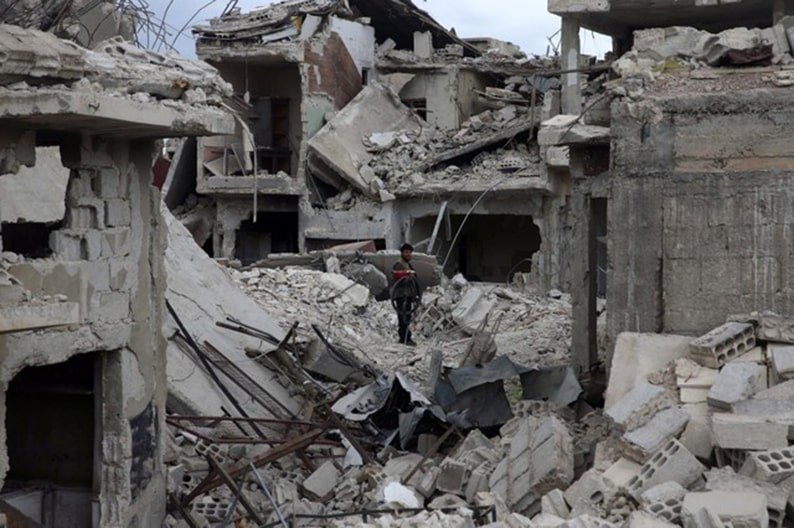 A man stands on rubble of damaged buildings in the besieged town of Douma, Eastern Ghouta, in Damascus, Syria

A US service member and another person from the US-led coalition battling Islamic State were killed by an improvised explosive device in Syria, US officials said on Friday.

They are the first coalition service members to be killed or wounded in an attack this year.

Two US officials, speaking on the condition of anonymity and citing initial information, said one of the people killed in the blast on Thursday blast was an American and the incident took place near the city of Manbij in northern Syria. They declined to comment on the nationality of the other individual.

Earlier on Friday, a coalition statement said two personnel had been killed and five wounded in Syria, but did not provide their nationalities.

The explosion happened on Thursday night, the coalition statement said.

The wounded were evacuated for treatment, according to the statement.

Manbij has largely been cleared of Islamic State and is significant because Turkey, which stormed the northern Syrian town of Afrin after an offensive against the Syrian Kurdish YPG militia, has repeatedly threatened to push its operations farther east to Manbij.

About 10 coalition personnel have been killed in non-combat-related incidents since Jan. 1, including seven Americans who died in a helicopter crash in Iraq earlier this month.

Islamic State militants continue to carry out bombings, ambushes and assassinations in Syria and Iraq despite the collapse last year of the cross-border “caliphate” declared in 2014 by their leader, Abu Bakr al-Baghdadi, whose whereabouts are unknown.

The United States says it has about 5,200 troops in Iraq, deployed alongside Iraqi armed forces. Some 2,000 US troops are in Syria, allied to a Kurdish-led alliance that holds the largest swath of territory still outside the control of forces loyal to President Bashar al-Assad.

The American casualty comes a day after President Donald Trump said the United States would be leaving Syria “very soon.” The State Department said it was not aware of any plans to withdraw from Syria.

Senior officials have said there is a need for a longer-term US commitment in Syria.

Last year, US Defense Secretary Jim Mattis said he expected to see a larger US civilian presence in Syria, including contractors and diplomats, as the fight against Islamic State militants nears its end and the focus turns toward rebuilding and ensuring the militants do not return.

Mattis has previously stated that US forces will stay in Syria as long as Islamic State fighters want to fight and prevent the return of an “ISIS 2.0.”

A house of lies falls on screen