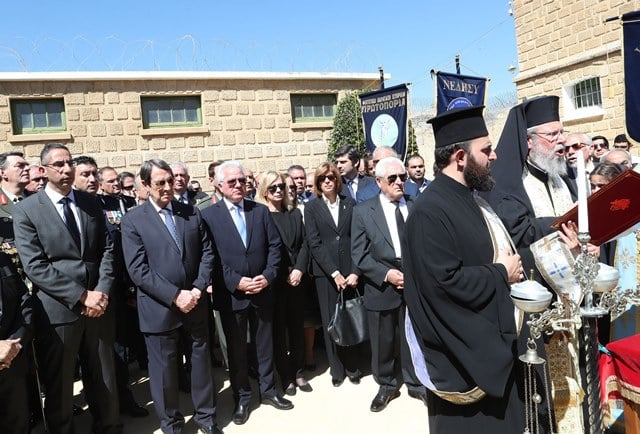 President Nicos Anastasiades called for unity on Sunday and stressed the importance of remaining focused on the goal of the reunification of the island.

He was speaking after a memorial service held at the Imprisoned Graves, in Nicosia to mark the 63rd anniversary of the start of the Eoka struggle for independence in 1955. Present were also cabinet members, MPs, Eoka veterans and military officials.

Anastasiades said that what led to the establishment of the Republic of Cyprus was “bravery, faith and unity”.

The Eoka fighters, he said, “delivered to us an independent and sovereign state”.

“Unfortunately, mistakes, divisions, Turkish greed and plots have brought about what we are experiencing today,” Anastasiades said.

What is required to be rid of the Turkish occupation, he said, is unity, commitment to the goals, vigilance and pay attention to the settlement negotiation “so that we can achieve a state that is viable, functional, and which allows for peaceful cohabitation and co-creation with our compatriots, the Turkish Cypriots”.

Turkish Cypriot leader Mustafa Akinci, commenting on the Eoka anniversary during a cultural event in the north, said that back then, Cyprus had a multicultural structure and Turkish Cypriots were one of the two main communities.

But during that time, he said, mainly the Church, Archbishop Makarios, and Eoka founder General George Grivas had started the armed struggle ‘allegedly against British rule’ but the goal was union with Greece.

They entered a struggle for only one community to  prevail  on the island, only one culture, Akinci said.

The era of imposing a single culture on the island and making dominant only one nation, he said, is a thing of the past.

Akinci said that the outcome of the events that began on April 1, 1955 shows how important mutual respect is for a democratic but also multicultural structure and the beginning of equality.

A number of events are being held in all districts on Sunday to commemorate the Eoka anniversary.

State officials will represent the government in church liturgies and other events taking place throughout the day in all districts.

Anastasiades is to also attend an event held by the Association of the 1955-1959 Eoka Fighters at 4pm at the Tassos Papadopoulos – Eleftheria stadium in Nicosia.

House Speaker Demetris  Syllouris took the salute at the student parade in Pachna, in Limassol, in honour of those who were killed in the struggle for independence or executed.

Teens arrested for racing at twice the speed limit