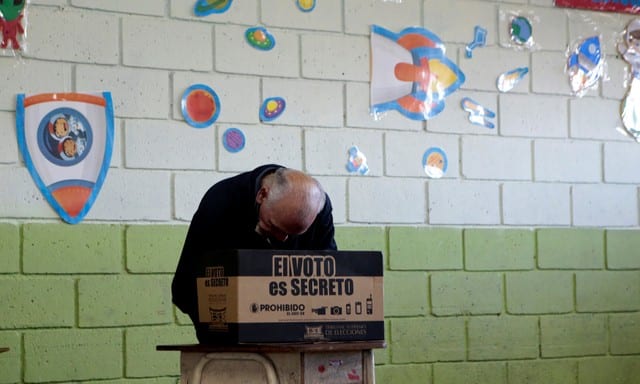 A voter prepares to cast his ballot during the presidential election at a polling station in San Jose, Costa Rica

Polls opened on Easter Sunday for a vote on whether conservative Christian singer Fabricio Alvarado Munoz can capture Costa Rica’s presidency, a result that would mark a sharp turn from the current government’s embrace of gay rights.

The two Alvarados, who are not related, took opposing positions on the January decision by the Inter-American Court of Human Rights, an influential regional body based in the Costa Rican capital of San Jose.

Fabricio, as supporters call him, called it an affront to traditional values and sovereignty in the Central American nation. Threatening to remove the country from the court’s jurisdiction, he shot from the margins to the top of a 13-candidate field, and won the first round of voting in February.

“We’re united… in defending life and family, but also to defend ethics and transparency and the battle against corruption,” the singer, who is a member of the Protestant Pentecostal movement, said on the eve of Sunday’s vote in a video appeal to Catholics, who account for more than six out 10 people in the country, seeking to forge common cause.

Since 2017, the government of President Luis Guillermo Solis has grown increasingly unpopular, in part over a corruption scandal involving Chinese cement.

The election has exposed divisions in the global tourist destination best known for its laid back beach culture and rainforest stewardship, but whose rural communities remain deeply conservative.

A win for Alvarado Munoz would be a set back for gay rights in Latin America, where several countries have implemented progressive policies in recent years.

In 2014, Solis ordered the gay pride flag raised alongside the Costa Rican colors atop his offices to mark the International Day Against Homophobia and Transphobia, the first time any head of state had done so in the Americas.

The symbolic act generated headlines across the globe.

On the campaign trail, Alvarado Munoz lamented the international attention the flag-raising brought, saying he would have favored “more positive news, like Costa Rica beating Mexico 3-0” at soccer.

The fight over same-sex marriage has overshadowed other key issues in the race, like a widening budget deficit which has triggered four credit downgrades over the last five years.

At a Saturday rally with students and artists in the capital’s La Granja neighborhood near the University of Costa Rica, Alvarado Quesada’s vice-presidential running mate addressed the crowd of about 300.

“Never before have we felt the country is at risk, never before have our hearts hurt like they hurt right now,” said Epsy Campbell, an Afro-Costa Rican and former presidential candidate who also helped found Solis’ center-left Citizen Action Party.

After the rally, she said in a brief interview that struggles for basic rights usually start small and grow.

“So many more people are (now) open to fighting for a more just and equal society than we ever would have thought,” she said.

“The older ones especially, but what I say is you could have a gay son or grandchild,” she said.

“We are the parents that have to support them and love them equally.”

Singing with the metal wolves