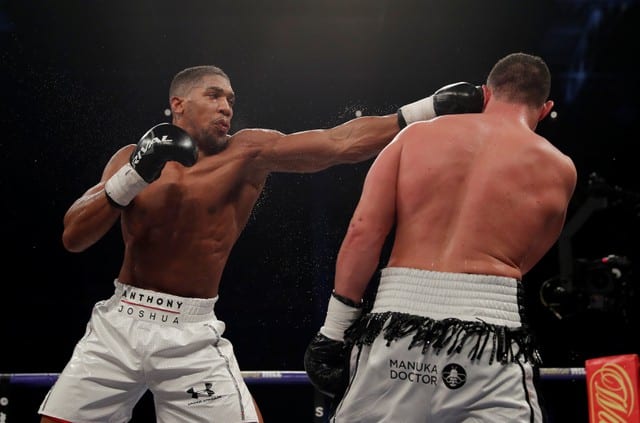 Britain’s Anthony Joshua moved a step closer to becoming undisputed heavyweight champion of the world on Saturday after beating New Zealander Joseph Parker on a unanimous points decision in their title unification bout.

The 2012 Olympic champion, taken to 12 rounds for the first time in his professional career after 20 previous knockouts, added Parker’s WBO belt to his own WBA Super, IBF and IBO titles.

“Do I want to become undisputed heavyweight champion of the world? IBO, WBO, IBF, WBA…I’m not into the hype, I’m about business. So let’s get the business done.

“Let’s see what the future holds, I’m down for whatever, whenever,” added the Briton, making clear he wanted Wilder to face him in Britain rather than Las Vegas.

The American was not among those present, despite being invited by organisers, the undefeated champion opting to watch from afar instead.

STICK BEHIND THE JAB

Both fighters had stepped into the ring undefeated, with Joshua weighing in six pounds heavier than his shorter opponent and with a longer reach.

If some had expected an early knockout it did not pan out that way, even if Joshua could be said to have controlled most of the 12 rounds by using his jab and left hooks to telling effect.

Apart from an explosive sixth round, with both trading some stinging blows, neither looked likely to buckle with Parker showing more staying power than any of Joshua’s previous opponents.

The referee also intervened repeatedly, breaking up the fight whenever the fighting livened up and calling a time out in the ninth with Joshua returning to his corner to tighten up his gloves.

“My strategy in there was to stick behind the jab,” said Joshua.

“I know the bookies say I might get a knockout…but forget the hype, Joseph Parker is a world champion. So I knew he was going to be determined. So this does become a boxing match, not a fight.

The 26-year-old New Zealander, who had been led into the ring by Samoan chiefs under a barrage of strobe lights before Joshua walked in to the sound of ‘Paid in Full’ and ‘Another One Bites the Dust’, was gracious in defeat.

“Today I got beaten by a better champion, a bigger man,” he said.

“I’m going to come back stronger. No regrets, take it on the chin. Better man on the day.

“I would love to have another go.”

Strasbourg is not just a court of human rights

eCall mandatory in new cars from this week