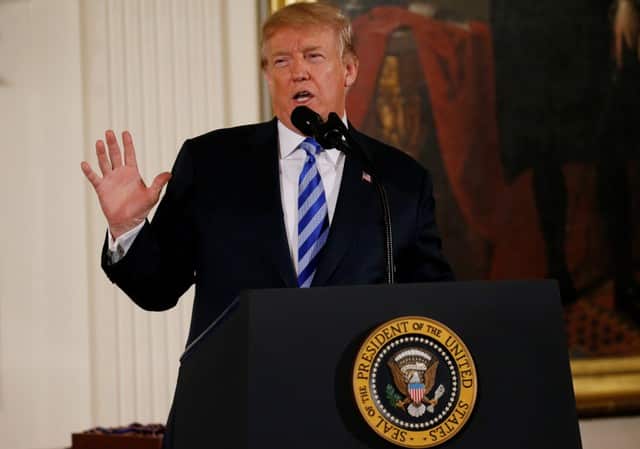 By Richard Cowan and Makini Brice

President Donald Trump declared as “dead” on Monday a program that protects immigrants brought to the United States illegally as children and pressed Congress to “immediately” pass legislation to secure the U.S. border with Mexico.

Trump, who has taken a hard line on legal and illegal immigration as president, said in September he was terminating the Deferred Action for Childhood Arrivals (DACA) program, but gave the Republican-controlled Congress until March 6 to replace it. Congress failed to meet that deadline, but courts have ruled the program can remain in place for now.

“DACA is dead because the Democrats didn’t care or act, and now everyone wants to get onto the DACA bandwagon,” Trump said in a Twitter post.

It was unclear whether Trump, in any new immigration legislation, would support safeguards for people protected by DACA. The White House did not respond to requests for comment on Trump’s tweets.

Taking a hard line on immigration appeals to Trump’s conservative political base.

“Congress must immediately pass Border Legislation, use Nuclear Option if necessary, to stop the massive inflow of Drugs and People … Act now Congress, our country is being stolen!” Trump wrote in another Twitter post.

Congress is in the second week of its spring recess.

Senate Republican leaders have ignored previous calls from Trump advocating the so-called nuclear option, which would involve changing Senate rules so Republicans could more easily overcome Democratic opposition to legislation in a chamber they control by a slender 51-49 margin.

Trump on Monday also reiterated his call for Mexico to stop people from entering the United States, after saying on Sunday he would terminate a major trade accord with Mexico if it does not do more to secure its border with the United States.

BACK AGAINST THE WALL

Trump made building a wall along the southern U.S. border with Mexico – and making Mexico pay for it – one of his top campaign pledges when he ran for president in 2016. Mexico has refused.

In the past, Trump had said he was open to a deal with congressional Democrats in which they would support funding for the border wall in exchange for protection for the Dreamers.

But on Sunday he indicated that time had passed, writing on Twitter: “‘Caravans’ coming. Republicans must go to Nuclear Option to pass tough laws NOW. NO MORE DACA DEAL!”

The caravan apparently referred to a group of 1,500 men, women and children from Honduras, Guatemala and El Salvador who are travelling in a “refugee caravan” organized by Pueblo sin Fronteras, a U.S.-based immigration advocacy group.

By travelling together, the immigrants hope to protect themselves from the crime and extortion that makes the route through Mexico toward the U.S. border dangerous. They say some but not all of them will seek asylum if they reach the United States.

No immigration deal has materialized in the Republican-controlled Congress despite months of efforts. The Senate considered several immigration proposals in February but rejected all of them including bipartisan bills and legislation tailored to Trump’s requirements.

Democrats had offered at one point to fully fund the wall but rescinded the offer in January, accusing Trump of reneging on elements of their tentative agreement.

In light of Trump’s call for the “nuclear option,” a spokesman for Senate Majority Leader Mitch McConnell on Monday noted that Republican senators oppose changing existing rules governing the debate and passage of legislation.

Major legislation usually needs a super-majority to pass the Senate. Without 60 votes in support of the 100-member chamber, the Democratic minority can sink a bill.

Former Laiki exec says he’s been made a scapegoat