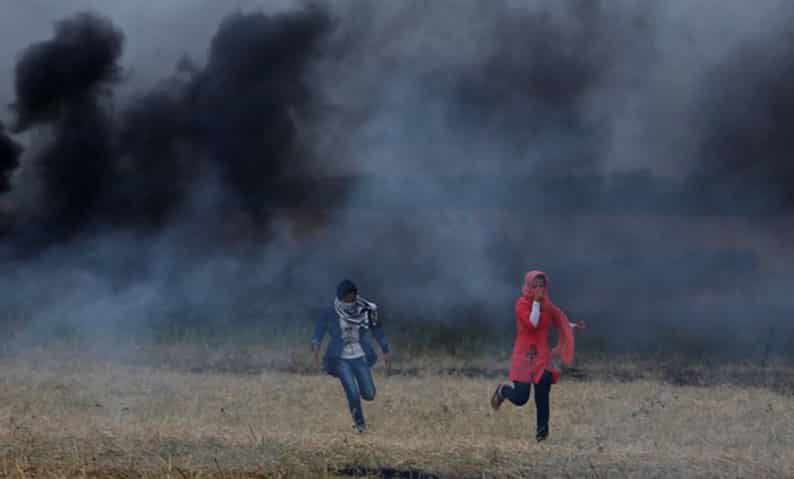 A Palestinian man was killed by Israeli gunfire in Gaza on Tuesday, Palestinian medics said, raising the death toll from clashes along the border to 17, and Israel’s defence minister warned further protests would be met with similar force.

Tens of thousands of Palestinians began a six-week-long protest last Friday in tent encampments set up along the fenced border of the Israeli-blockaded Gaza Strip. They are pressing for a right of return for refugees to the villages and towns where their families lived before 1948 in what is now Israel.

Sixteen Palestinians died after being shot by Israeli troops on the first day of the protest, Palestinian medical officials said. The 17th Palestinian killed, 25-year-old Ahmed Omar Arafa, was standing about 50 metres  from the fence when he was shot, his father, Omar Arafa, told Reuters.

“He was standing next to me; he posed no danger to them but they killed him,” he said. An Israeli military spokeswoman had no initial information on the latest reported fatality.

The deaths occurred in the course of one of the largest Palestinian demonstrations along the 65-km  border in years. Israeli Defence Minister Avigdor Lieberman defended Israel’s response.

“I warn (Gaza protesters) against continuing the provocation. We have set clear game rules and we do not intend to change them. Every person who comes close to the fence is endangering their lives,” he said on a visit to the border.

“This was a well-organised provocation by Hamas’s armed wing in an attempt to harm our sovereignty, to disrupt daily life and to disturb Israelis on their Seder (traditional Passover meal) night. We are doing what we must do.”

Gaza, a small coastal enclave, has been ruled by Hamas, a Palestinian Islamist movement sworn to Israel’s destruction, for much of the time since Israeli soldiers and settlers withdrew in 2005 after a 38-year occupation.

The military said its troops used live fire only against people trying to sabotage the fence or rolling burning tyres and throwing rocks. Palestinian organisers said they had called for a peaceful protest and Hamas denied that its fighters had fired on Israeli forces, using the crowds as cover, though it said five of the dead were members of its armed wing.

Lieberman has characterised most of those killed last week as “terrorists that we know well who are active in the armed wing of Hamas and Islamic Jihad. They were not innocent civilians who were part of a civil protest”.

In Gaza, protesters have begun gathering thousands of mirrors which they hope to use to blind Israeli soldiers on the other side of the fence. The protesters say they also intend to use laser pointers to distract Israeli army sharpshooters.

“We were saddened by the martyrdom of 16 of us, some of them we knew as friends. This Friday we shall rise to challenge the occupation which killed them, and show them we are not afraid,” said Issa Abu Jamea’, 29, from Khan Younis in Gaza’s south.

He said he had taken part in protests every Friday since US President Donald Trump’s Dec. 6 decision to recognise Jerusalem as Israel’s capital, and to move the US Embassy to the city. Its eastern half was taken by Israel in a 1967 war and is wanted by Palestinians for the capital of a future state.

Palestinian organisers said they expect the number of participants to again swell to tens of thousands on Friday.

Abu Jamea’ said that he and his friends had collected about a thousand tyres. The hash tag “Jomaat Al-Kawshook”, or “Friday of Tyres”, was trending on Twitter.

“We have prepared mirrors, lasers and tyres to burn … they will help to distract Israeli snipers and blind them. We aim to protect ourselves and the protesters,” Abu Jamea’ said.

In Gaza City, Daoud Shehab, a protest organiser who is also spokesman for the militant Islamic Jihad, urged participants to remain peaceful. “We urge our people not to fall for Israeli provocation attempts,” said Shebab.

The protest action is set to wind up on May 15, when Palestinians mark the “Naqba”, or “Catastrophe”, when hundreds of thousands fled or were driven out of their homes during violence that culminated in war in May 1948 between the newly created state of Israel and its Arab neighbours.

Israel has long ruled out any right of return, fearing it would lose its Jewish majority.