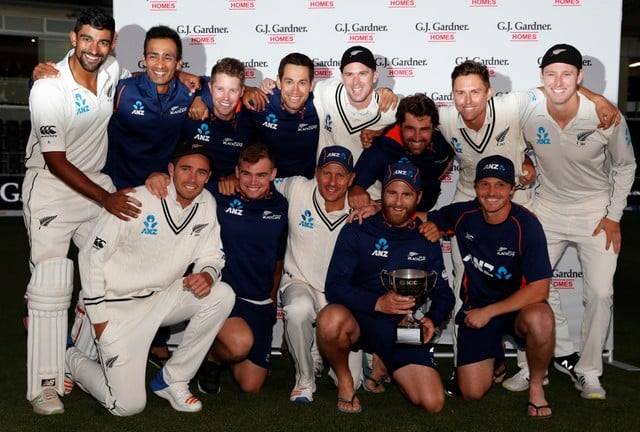 Tail-ender Ish Sodhi hit a gutsy half-century as New Zealand fought a defiant rearguard action on a tense final day to hold on for a draw in the second Test on Tuesday and secure a first series win over England since 1999.

Winners of the first Test in Auckland by an innings and 49 runs, New Zealand were 256 for eight when the umpires offered Sodhi the light, still 126 runs in arrears but with the all-important draw secure.

England made the perfect start to the final day when Stuart Broad claimed wickets with the first two deliveries but the tourists were unable to winkle out the final few batsmen as the fading light cast long shadows over Hagley Oval.

Opener Tom Latham scored a gritty 83 but it was spinner Sodhi’s 168-ball 56 not out in partnerships with Colin de Grandhomme and then Neil Wagner that most frustrated England.

“Series victories, especially over England, don’t come around that often and just to be part of this, especially when I was quite disappointed with my performance with the ball, was massive for me,” Sodhi said.

“The whole time I was thinking about batting as straight as I could, they started bowling bumpers around the wicket and I found them quite hard to pick up so there were some tough periods there.”

England skipper Joe Root tried every bowling option available to him and his team had their chances to take wickets throughout the day, even if none of them were clear cut.

The draw brings an end to a tour Down Under that started in October and also included a 4-0 Ashes defeat, helping extend England’s run without a test win overseas to 13 matches.

New Zealand’s success in the series was built on their new ball attack and Tim Southee was named Man of the Match for his 6-62 in England’s first innings, while his partner Trent Boult won the series award for his 17 wickets over the two matches.

“The bowling attack has been brilliant,” said New Zealand captain Kane Williamson. “But those two guys in the last session, Sodhi and Neil Wagner – just a phenomenal effort. It was an amazing day of test cricket.”

England, humiliated when dismissed for 58 in the first innings in Auckland, had been in the driving seat in Christchurch after scoring 307 in their first innings and 352-9 declared in the second after New Zealand’s first knock of 278.

“We threw absolutely everything at New Zealand today, very proud how we went about it as a group. Fair play to New Zealand, they hung on very well.” Root said.

“Bar that first innings, we’ve played some good cricket and especially in this game, I think we showed what we are about.”

The hosts resumed on 42-0 on Tuesday and seamer Broad removed Jeet Raval (17) with his loosener before coming up with a peach of a delivery to take the key wicket of Williamson for a golden duck when the New Zealand captain edged behind.

Henry Nicholls also made 13 before he became paceman James Anderson’s 531st test victim, miscuing a drive that took an edge into the hands of Cook in the slip cordon.

BJ Watling scored a battling 19 before getting across the crease to flick Mark Wood to Anderson at backward square before Leach got his second wicket when Latham top-edged a sweep.

Sodhi put on 47 runs for the seventh wicket with de Grandhomme and New Zealand looked in real trouble when the all-rounder pulled a Wood bouncer to Leach at fine leg.

Wagner came out and joined Sodhi at the crease, however, and the pair batted through more than 31 overs until the paceman was dismissed after a 103-ball knock for seven runs in what turned out to be the last action of the series.

“Waggy was really good, he got me through the tough periods,” said Sodhi.

“He’s a fighter when he bowls and he showed it with the bat today and he dragged me along with him.”

Fruit and veg rip-off ahead of Easter

Everyone happy to see Woods back at Masters, for now