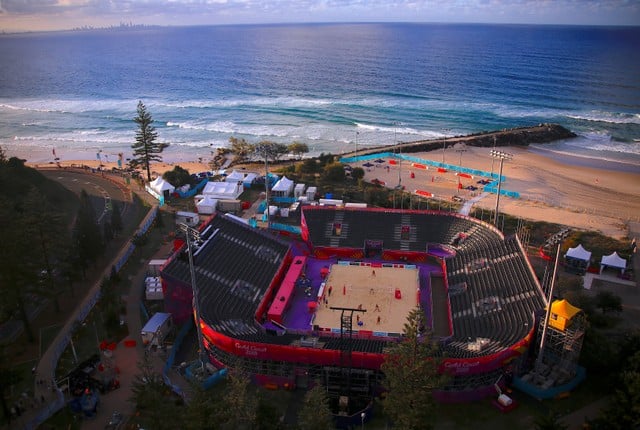 Athletes participate in a training session at the venue for the upcoming Commonwealth Games Beach Volleyball, located on Coolangatta Beach on the Gold Coast, Australia

The Commonwealth Games has become a multi-sports party that struggles to pull high-profile guests but enthusiastic host Australia has promised a beachside bash on the Gold Coast to reaffirm the event’s place in the global landscape.

More than 6,600 athletes and team officials from 71 Commonwealth nations and territories will flock to the glitzy resort strip and other cities in sun-drenched Queensland to compete in 18 sports ranging from athletics to lawn bowls.

No other nation brings quite the same fervour to the quadrennial Games as Australia, and the hosts will have a full stable of stars in their record 473-athlete delegation when the event opens on Wednesday.

Outside the country, however, the Games lack the same pulling power and recent editions have been almost as notable for their absentees as their confirmed starters.

Barring a token appearance for Jamaica in the relays at Glasgow, athletics’ most bankable drawcard Usain Bolt steered clear of the showpiece during his brilliant career.

A host of track and field’s biggest names will similarly dodge the Gold Coast, including Olympic 800 metres champion David Rudisha and fellow Kenyan Asbel Kiprop, the three-time world champion in the 1,500m.

There will still be enough quality on show, however, to draw crowds to Carrara Stadium, where Jamaica’s latest sensation Elaine Thompson, the reigning Olympic 100 and 200m champion, will headline the women’s sprints.

Her team-mate Yohan Blake, a former 100m world champion, will also highlight the men’s event and hope to step out of the shadow of his former training partner Bolt.

“Usain Bolt has left his legacy for us to carry on and that’s what we want to do,” Blake, runner-up behind Bolt in the 100 and 200m at the London Olympics, told local media after landing in Australia.

“That’s what I want, to start with the Commonwealths, to take over the dominance of the sprinting world.”

South Africa’s double Olympic champion Caster Semenya will run in the 800 and 1,500m, while the burden of home expectations will fall on Gold Coast local Sally Pearson, who will bid for a third consecutive gold in the 100m hurdles.

The Games’ chief ambassador, Pearson won a new legion of fans last year when she claimed a second 100m hurdles world title in London, putting four injury-blighted years behind her.

Locals will also pack the terraces at the Optus Aquatic Centre where Australia’s formidable swim team will be expected to dominate.
A number of their top swimmers skipped last year’s world championships in Hungary to focus on the Gold Coast and some will be hugely motivated for success after flopping at the Rio Olympics.

Former 100m world record holder Cate Campbell, who finished sixth in Rio after being the raging favourite for gold, has returned to form after a year-long sabbatical.

Men’s Olympic 100m champion Kyle Chalmers may face his stiffest test against another Australian in Cameron McEvoy, who owns the fastest time in a textile swimsuit (47.04 seconds).

The track cycling events promise to be hard-fought between strong English and Australian teams in a Games that also boasts complete gender parity across all events for the first time.

Still riding high from the London Olympics, England topped the table in Glasgow with 174 medals, including 58 golds, dislodging Australia for the first time since 1986.

Australia will be determined to restore their dynasty on home soil.

Temperatures slightly down on Tuesday