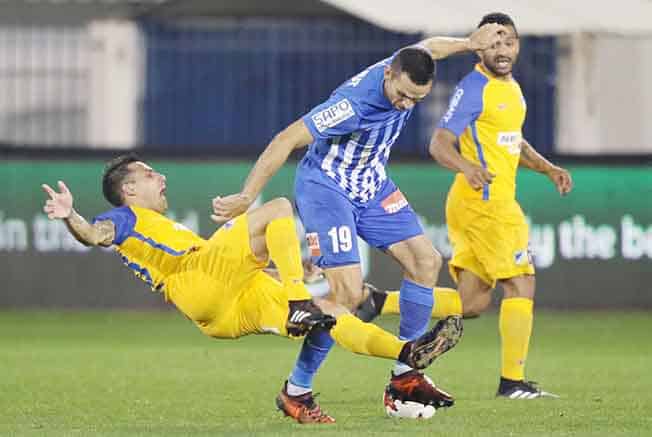 The midweek action continues in the fifth and final games of the first round of the Cyprus football championship playoffs with the clash at the Antonis Papadopoulos in Larnaca between Anorthosis and Apoel taking centre stage.

In the other top group game, Apollon entertain Omonia while in the relegation group, leaders Doxa Katokopias are away at Pafos FC.

The games between Anorthosis and Apoel are usually tough-tackling and bruising encounters bordering on the limit and this will be no exception. A win for Anorthosis will see them move to within four points of second-placed Apoel while a win for the champions will see them move a step closer towards their sixth consecutive title.

Anorthosis’ Djibril Cisse is not expected to passed fit in time for the game while Apoel coach Bruno Baltazar will be without the injured Stathis Aloneftis and Giorgos Efraim.

Following their heavy defeat to AEK on Saturday, Apollon will be looking to bounce back with a convincing performance and the three points against Omonia at the Tsirion stadium in Limassol.

Papoulis and Maglica, who between them have scored 25 goals this season, are both suspended but Apollon coach Avgousti will be delighted to have his tough-tackling midfield enforcer Esteban Sachetti back after the Argentinian served his suspension.

Omonia on the other hand remain the only team from either group to have lost all four playoff games and despite showing some improvement in their last outing it will be a surprise if they manage to get anything out of this game.

In the bottom group, Pafos FC are at home to group leaders Doxa Katokopias with the home side keen to make amends for their poor showing against Olympiakos last time out and dispel any thoughts of being re-dragged into a relegation scrap.

The games at the Antonis Papadopoulos and in Pafos kick off at 5pm while the Limassol game kicks-off at 7pm.