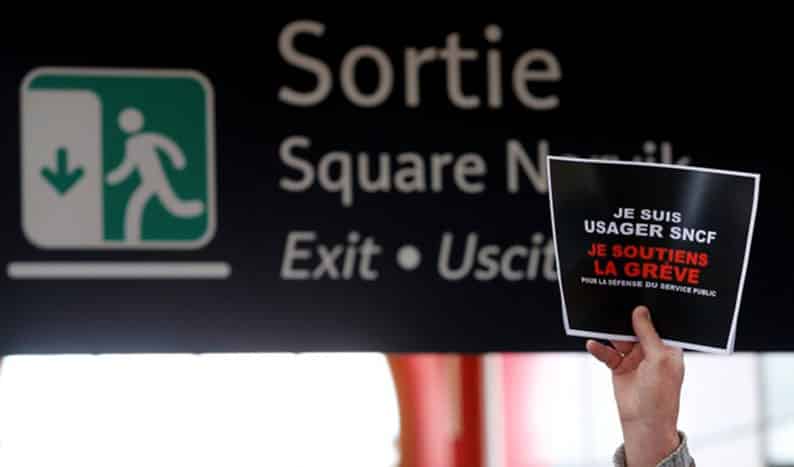 A passenger holds a placard which reads, "I am a SNCF user I support the strike for the defense of public service", as railway workers demonstrate inside the Gare Saint-Charles train station on the second day of a nationwide strike by French SNCF railway workers, in Marseille

Commuters in and around Paris pushed their way onto the few trains running during the rush-hour while many platforms in the French capital’s busiest stations lay empty.

SNCF data at midday showed the number of drivers on strike fell slightly on Wednesday, though more signalmen and conductors had walked out than a day earlier. Across the company, including administrative and sales staff, the participation rate dipped.

Macron wants to transform the heavily indebted rail company, which loses 3 billion euros each year, into a profit-making public service able to withstand foreign competition when its monopoly ends in 2020 in line with European Union rules.

Unions reject plans to end rail workers’ special privileges, including job-for-life guarantees and early retirement, and complain the government is paving the way for privatising the SNCF.

Macron, a former investment banker, has set a summer deadline for the overhaul to be completed.

“I don’t understand the strike. Some say we want to break up public services and it’s simply wrong,” Julien Denormandie, a junior minister in Macron’s government, told BFM TV.

In taking on the rail unions, Macron is treading where past presidents have either failed or steered clear, determined to cement his image as a fearless and indefatigable moderniser of the French economy.

So far, though, they have shown no sign of coalescing into a single, more potent movement, just as France prepares to mark the 50th anniversary of the May 1968 anti-establishment revolt that transformed the nation.

On Wednesday, only one in seven high-speed TGV trains were running – slightly more than on Tuesday – and one in five trains on overground commuter lines into Paris, similar to Tuesday’s levels. The unions plan to strike two days in every five over the next three months.

“It’s not our aim to frustrate rail passengers. Our goal is to find a way out of this row, to sit down and negotiate and find real solutions,” said Roger Dillenseger of the UNSA-Railways union.

The SNCF said the participation rate fell to 30 per cent of staff from 34 per cent on Tuesday. However, the number of striking conductors and signal-box workers – considered essential for running services – climbed by 8 and 7 per centage points respectively.

Before the strike, the government offered small concessions, including delaying the opening of SNCF networks to foreign companies as long as legally possible and dropping plans to push some aspects of the reform through by decree.

It has, however, said it will not discuss how much of the SNCF’s 46 billion euro debt pile the Treasury will assume until a deal is reached on employment benefits, prompting union accusations that it negotiating “with a gun to their heads”.

Transport Minister Elisabeth Borne faced calls on Wednesday from within Macron’s ruling Republic on the Move (LREM) party to address the issue earlier.

“It is important that the government says how, when and under what conditions the SNCF’s debt will be taken over,” Jean-Baptiste Djebarri, parliamentary rapporteur on SNCF reform, told Europe 1 radio.

Russian ambassador seeks to allay fears over ties with Turkey

Green transition slowed by economic and social barriers, not technology