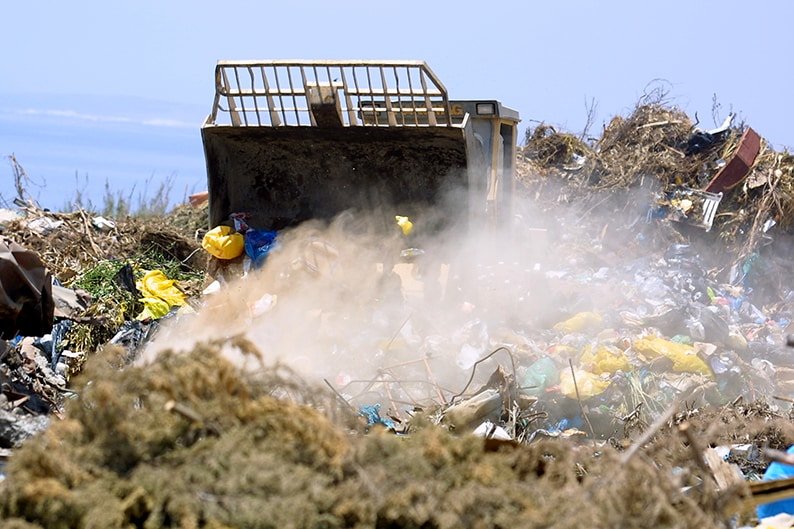 The government has taken steps that are expected to lead to the swift closure of the landfill site at Kotsiatis, Agriculture Minister Costas Kadis said on Thursday, after local residents sent the government an ultimatum, saying they would close roads to the area within two weeks if they did not get a convincing timeframe for a shutdown.

Kadis told reporters that earlier this week week the cabinet approved a framework agreement to be hammered out between the government and the current operators of the landfill.

The proposed fix involves shuttering the landfill and diverting the garbage sent there to the waste-processing facility at Koshi.

Implementation of the agreement, following more talks between the two parties, would lead to the shutting down of the problematic landfill, he said.

The negotiations with the operators would get underway sometime over the next few days, with a view to finalizing a deal “right after the Easter holidays,” Kadis said.

His statements came as the Peria Chorio and Nisou community council threatened to block all streets leading to the nearby landfill in two weeks’ time unless the government presented a convincing timeframe for the definite closing down of the facility.

The community council said in an announcement that they would no longer tolerate postponements to closing the landfill, which threatens public health and safety of the area.

The last straw was last week’s massive fire at the landfill, which authorities are still trying to put out, the community council said.

Heavy smoke from the blaze, which broke out last Friday afternoon, covered Pera Chorio, Nisou, Dali, Lymbia and part of Alambra, while half-burned material ended up in the yards of houses in residential areas.

“Due to the great height of the garbage, which has reached the peaks of nearby hills, during the last fire, there was a real hazard that burning paper and thousands of nylon bags would fly away and burn crops and trees in the surrounding area, and other properties such as residences, farms, and sheds,” it said.

It added that operations to fully extinguish the fire continue and “despite the painful, and constant efforts” of the Nicosia Municipality staff, the Nicosia District Administration that assists with additional machinery and the community council it is not yet known when the areas that are still smouldering will be adequately covered up to stop the emission of harmful smoke and other odours.

The community council said that they, for the umpteenth time, stressed in a letter last week to the new agriculture minister that their exposure to the smoke, poses real dangers as the dioxins produced by municipal waste when burned are proven to be very harmful and are blamed for a number of serious diseases. They said they have asked to meet with him to discuss this matter but they yet to hear from him.

Procrastination in ending the operations of the landfill, the community council said, in tandem with bad conditions at the dump, and the expected temperature rise, spirals possibility for new fires, “which we cannot tolerate in any way”.

“The only solution to the problem remains the immediate closing down and rehabilitation of the landfill,” it said.

The community council said that they have decided to give the government two weeks to provide “convincing timeframes for the closing down of the landfill”.

If this is not done, they said they will close down all roads leading to Kotsiatis landfill.

“We feel that 40 years are far too many for the residents to pay the price of a wrong from the beginning decision on the designation of the landfill where it is today”, it said.

Former Agriculture Minister Nicos Kouyialis had said last December that the landfill, which was supposed to originally shut down in 2009, was to close within a year. After the idea of building a separate waste-management plant in Nicosia was scrapped, it was decided to transfer rubbish from Kotsiatis to the Koshi plant in Larnaca. Procedures however were then delayed following the bribery scandals and ensuing trials concerning the Koshi and Paphos sanitary landfills.

The EU initiated an infringement process last May for the delays over Kotsiatis with Cyprus looking at fines of around €30,000 for each day of delay. Following the visit last October by European Environment Commissioner Karmenu Vella, the EU gave the government more time.