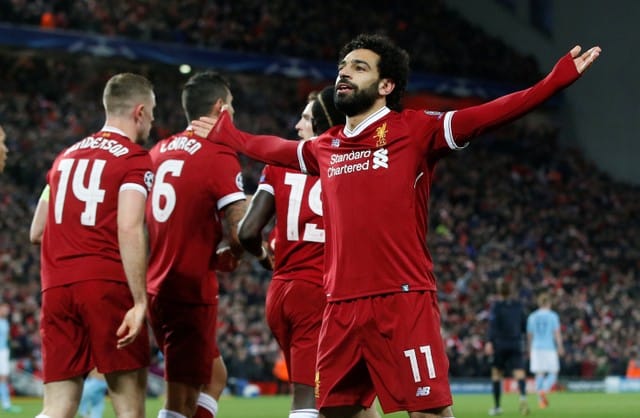 The noise level inside the stadium for Liverpool's 3-0 victory in the Champions League quarter-final, first leg was noticeably louder than for the January league clash between the two clubs

There is something special about Liverpool’s Anfield on European nights as it transforms into a swirling cauldron of noise capable of inspiring its hosts and intimidating their foes as Manchester City discovered on Wednesday.

Big games create big atmospheres, but the noise level inside the stadium for Liverpool’s 3-0 victory in the Champions League quarter-final, first leg was noticeably louder than for the January league clash between the two clubs.

Anfield can disappoint the tourist visiting for a domestic league game. Once the ritual, communal singing of ‘You’ll Never Walk Alone’ is done, the passion seems to dissipate. But that certainly was not the case on Wednesday.

European success is in Liverpool’s DNA and their supporters feel it. A banner in the Kop end reminded everyone of the five European titles won by the club – from 1977’s first triumph, in Rome against Borussia Moenchengladbach to the extraordinary comeback in the 2005 final against AC Milan in Istanbul.

It is an unequalled pedigree for an English club and one which Manchester City, whose sole continental success came in the 1970 European Cup Winners’ Cup, can only hope of one day matching.

City manager Pep Guardiola often talks of the qualities that the big, experienced clubs in Europe, like his old side Barcelona and their rivals Real Madrid, are able to produce in the Champions League. Coping with the big occasion and hostile environments is certainly one of them.

On Wednesday, City looked rattled, however much they may protest to the contrary, not only by the early goals they conceded but by the febrile atmosphere before the game, inside and outside the stadium.

City’s team bus was met by hundreds of home fans who had lined the narrow streets at the entrance to Anfield and objects, including bottles and cans, were thrown at the vehicle carrying the players.

Liverpool apologised for the incident, which is sure to be investigated by European football’s governing body UEFA.

City manager Guardiola, while critical of the incident, did not use it as an excuse for his players, who made such a poor start to the game, and midfielder Kevin De Bruyne dismissed the idea that it had an impact on their performance.

“No, it doesn’t change anything. As long as you keep the violence down there’s nothing wrong with it,” De Bruyne said.

That incident was unsavoury, but the atmosphere inside the stadium was the right kind of passion and hostility.

It is hard to believe that the sheer noise levels, from all four corners of the ground, did not impact on the City players as they struggled to cope with the swarming and pressing of Juergen Klopp’s side.

Liverpool’s players certainly believe the atmosphere played a role in the outcome.

“It gives you an extra boost – especially in the second half when we were defending a lot, to keep going. It gives you a little bit extra. It’s just amazing to play in that atmosphere,” he said.

The uniqueness of a European night on Merseyside was not lost on Liverpool’s right back and local boy Trent Alexander-Arnold.

“It’s the stuff dreams are made of; you dream of it as a kid growing up wanting to play in these types of games,” he said.

City fans will be hard-pressed to match that atmosphere at their 15-year-old home, the Etihad Stadium, on Tuesday for the return leg.

Yet if part of Anfield’s magic on European nights is linked to their history, then Guardiola’s side have a chance to start creating their own — if they can produce the unexpected comeback they will need to progress.