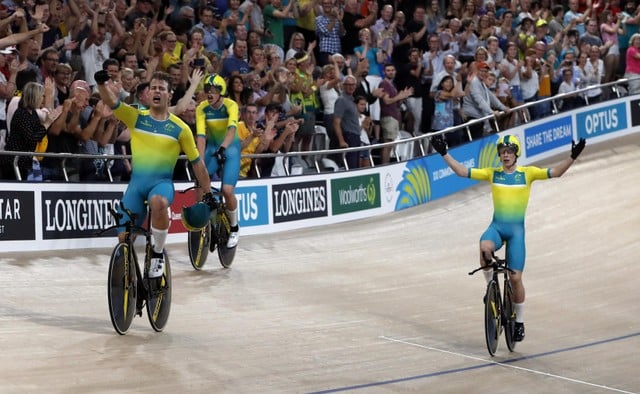 The classy quartet blazed around the Brisbane circuit in three minutes 49.804 seconds, smashing the mark of 3:50.265 seconds set by Great Britain at the Rio Olympics.

“We’re in our home country. That is what dreams are made of. This is what we strive for every day,” said an ecstatic Welsford.

“When I looked at the board, I had to have a second glance – 3.49 – then it was pure happiness. I just screamed and let out all the emotion.

The Australians crossed nearly six seconds ahead of the Englishmen, striking an emphatic early blow in the track cycling battle that local media have dubbed the “the Ashes on wheels”, a reference to the nations’ fierce cricket rivalry.

The triumph came soon after their female compatriots set a Commonwealth record (4:15.214) in the same event, humbling silver medallists New Zealand for the gold.

Alexandra Manly, Annette Edmondson, Ashlee Ankudinoff and Amy Cure were raging favourites for the title and they delivered in style, running the New Zealanders down before the finish.

For Edmondson, Ankudinoff and Cure, the gold was some consolation after a tough Rio Olympics, where they finished outside the medals after suffering a horror crash during training.

“After the setbacks in Rio … that is sport, and it has its ups and downs,” said Edmondson, a twice world champion.

“Our thoughts were on this race, and to get on with it and get the job done.”

Australia were primed to sweep all four golds in the able-bodied events but failed to make the final in the men’s team sprint after a technical error during their qualifying race.

Four people killed in a shooting at Turkish university