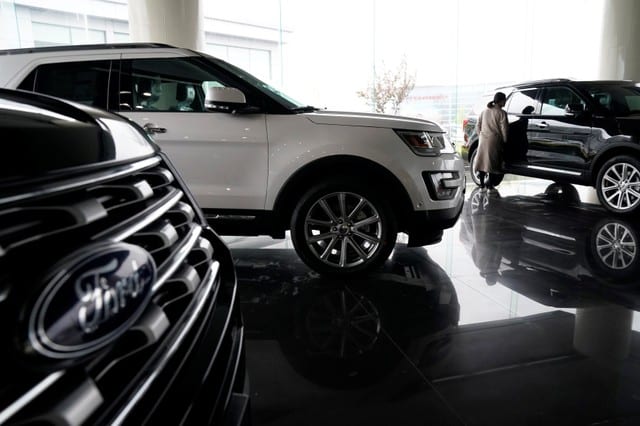 China’s Ministry of Commerce responded immediately and said it would take new comprehensive measures to safeguard the country’s interests if the United States sticks to its protectionist behaviour, after President Donald Trump threatened an extra $100 billion in tariffs on Chinese imports.

In a statement on its website on Friday, the ministry reiterated that it did not want a trade war, but was not afraid of one, and said that the trade conflict had been provoked by the United States.

The further tariffs were being considered “in light of China’s unfair retaliation” against earlier U.S. trade actions, which included a proposed $50 billion of tariffs on Chinese goods, Trump said in a White House statement.

“This is what a trade war looks like, and what we have warned against from the start,” said National Retail Federation President and CEO Matthew Shay.

“We are on a dangerous downward spiral and American families will be on the losing end,” Shay added in a statement, urging Trump “to stop playing a game of chicken with the U.S. economy.”

Financial markets, roiled for days by the trade fight and Trump’s management of it, whipsawed again on the new threat. After a bullish regular trading day, U.S. equity futures sold off sharply in after-market-hours trading.

U.S. stock futures slid 1 percent and the dollar dipped against other major currencies, while Asian shares flitted in and out of positive territory. Chinese markets were closed for a holiday.

March 8
Trump announces import tariffs of 25 percent on steel and 10 percent for aluminum, but exempts Canada and Mexico

March 18
Forty-five U.S. trade associations representing some of the largest companies in the country urge Trump not to impose tariffs on China, warning it would be “particularly harmful” to the U.S. economy and consumers. The group includes the U.S. Chamber of Commerce, the National Retail Federation and the Information Technology Industry Council.

April 1
China increases tariffs by up to 25 percent on 128 U.S. products, from frozen pork and wine to certain fruits and nuts

April 4
China announces it will impose additional tariffs of 25 percent on 106 U.S. goods including soybeans, autos, chemicals, some types of aircraft and corn products and other agricultural goods. The products targeted by the tariffs were worth $50 billion in 2017

April 5
The World Trade Organization says China sought consultations with the United States, the first step in a WTO dispute, over Washington’s announced tariffs on the $50 billion worth of Chinese imports.

The notification to the Geneva-based watchdog triggers a 60-day deadline for the two sides to settle the complaint or face litigation at the WTO by a neutral panel of arbitrators.

Trump says he has instructed U.S. trade officials to consider $100 billion in additional tariffs on China. In a statement, he announces the U.S. Trade Representative has determined that China “has repeatedly engaged in practices to unfairly obtain America’s intellectual property.”

In his statement, Trump said the U.S. Trade Representative had determined that China “has repeatedly engaged in practices to unfairly obtain America’s intellectual property.”

“This latest intimidation reflects the deep arrogance of some American elites in their attitude towards China,” the state-run Global Times said in an editorial.

On Tuesday, USTR proposed 25 percent tariffs on more than 1,300 Chinese industrial and other products from flat-panel televisions to electronic components. China shot back 11 hours later with a list of proposed duties on $50 billion of American imports, including soybeans, aircraft, cars, beef and chemicals.

“Rather than remedy its misconduct, China has chosen to harm our farmers and manufacturers,” the Republican president said.

Republican lawmakers from Western and Midwestern states have voiced worries about a big hit to U.S. farming exporters.

On the new tariff threat, Republican Senator Ben Sasse said in a statement: “Hopefully the president is just blowing off steam again but, if he’s even half-serious, this is nuts.

“Let’s absolutely take on Chinese bad behavior, but with a plan that punishes them instead of us. This is the dumbest possible way to do this,” said the lawmaker from the farm-belt state of Nebraska.

The U.S. Department of Agriculture is looking for ways to assist farmers affected by China’s tariffs, USDA undersecretary Bill Northey told Reuters, but did not offer specifics.

White House officials have suggested throughout the week that talks with the Chinese could help resolve trade issues between the two countries. China ran a $375 billion goods trade surplus with the United States in 2017. Trump has demanded that China cut the trade gap by $100 billion.

A senior U.S. official who requested anonymity told Reuters no formal negotiating sessions had yet been set, but that the United States was willing to negotiate with China.

The U.S. tariffs are aimed at forcing changes to Chinese government policies designed to transfer U.S. intellectual property to Chinese companies and allow them to seize leadership in key high-technology industries of the future.

TARIFF TARGETS NOT YET CHOSEN

A USTR spokeswoman said that the $100 billion second-round of potential tariffs had not been determined yet and would be selected by USTR career staff – not political appointees – along with economists and trade experts.

The new list will be proposed in the same manner as the first round and will go through a similar public comment period before any of them are activated, the spokeswoman said.

The two biggest categories of U.S. imports from China last year were communications and computer equipment, totaling $137 billion according to U.S. Census data. Cellphones and computers, key portions of these categories, were spared from the initial tariffs list.

Apparel and footwear, both labor-intensive industries in China, made up a combined $39 billion in U.S. imports.

“We need the U.S and China to come to the table and identify solutions to these serious problems,” he added.

Hamilton chasing maximum points and another record in Bahrain