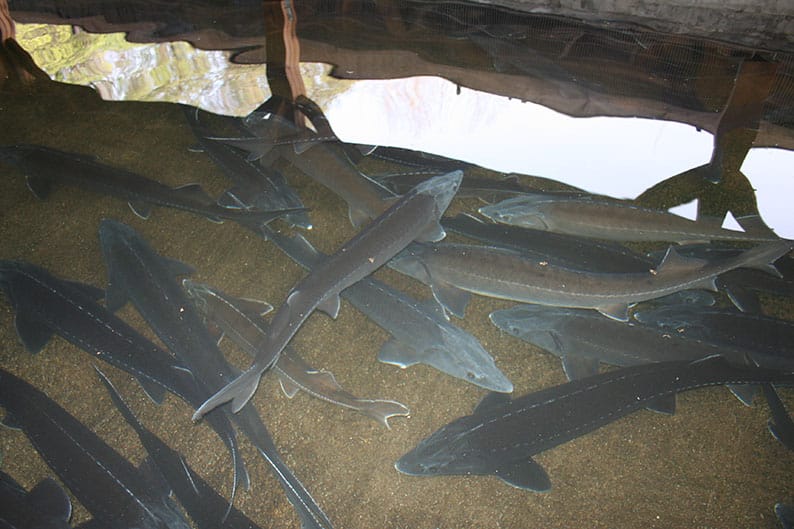 A 300-year-long family history on the flanks of the Troodos, skills gleaned through generations of catching crab and eel in the year-round waters of the Kouris river, plus the inspiring story of Catherine the Great’s favourite Greek mariner, Ivan Varvarakis, account for the creation of The Land of Dreams, one of the most innovative and unlikely businesses launched in Cyprus in recent years.

“This land has been ours for centuries,” says 41-year-old Andreas Christofi, a graduate of the Agrarian Institute of Moscow’s People’s Friendship University and a fluent Russian speaker, when we meet amid the hills at his fish farm on the banks of Kouris.

Stretching away behind us, several rows of interconnected, well-stocked ponds teem with sturgeon, that highly prized producer of one of the world’s great luxury delicacies – black caviar.

At a nearby open-air, wooden pavilion, a Russian family is sitting down to a sumptuous meal. The centrepiece is a huge smoked fish decoratively placed in the middle of their table. Next to us, a group of anglers stand contentedly on the banks of a man-made lake, fishing rods in hand.

Sturgeon, carp and trout abound in the lake waters, Andreas tells me, adding that the successful fisherman can opt to consume his catch or, in the case of sturgeon and carp, release the fish back into the lake. Trout cannot be put back in the water because they would not survive.

Andreas quickly calculates the number of fish a group of four anglers can reel in during one session and how much their fishing expedition might cost them in all. When all is said and done, it’s a good deal, compared to some other places in Europe, he says.

“All in all, it is not that expensive. It will feed their families. And they can be sure the fish they have will be the best in Cyprus,” he says. “Everything we feed our fish is best quality. We have to if we want to get the best results!”

Andreas’ family has always been involved in some form of agriculture. They own the biggest stone fruit orchards in Cyprus. Their 25-hectare terraced farm is located in the mountain village of Trimiklini, half-way between Limassol and Troodos. Nowadays, the land is divided into two parts: the fish farm that Andreas has been developing gradually over the last five years and a huge orchard bountiful with apricots, peaches, plums, nectarines, apples and pears.

According to the story on the Christofi business website, the family fortune and its longstanding association with Trimiklini dates back to the time of their ancestor Charalambous, who in Ottoman times converted to Islam and changed his name to Ali. He did so, the story goes, in order “to protect his sisters” but in private he remained a practising Christian.

Charalambous/Ali was obviously a very pious man. For example, the records of the Chrysoroyiatissa monastery show that he donated 622 grosia (15 kilogrammes) of silver for construction of its new church in 1770. One Christmas, Charalambous/Ali was discovered in Christian prayer and faced a death penalty. Luckily for him and the family, the sentence was commuted and it was his wealth, not his life, that was confiscated.

Undaunted, Charalambous’ entrepreneurial spirit flourished as succeeding generations of the Christofis family rebuilt their enterprises and their fortune. By the 1930s, they were among the best known traditional grain growers in the area. It was then that Andreas’ great-grandfather decided to change the line of business and to focus on fruits instead – first by planting apple and citrus trees and later switching to stone fruits.

“The land where we have the fish farm now was entirely covered in apricot trees,” Andreas says proudly. “Yet, even today, we are still the biggest stone fruit producers on the island.”

Asked how the unlikely idea of breeding sturgeon and producing black caviar in Cyprus of all places first cropped up, Christofi points to his surroundings. Being raised in such close proximity to the island’s only river that has water all year round was, he admits, his main inspiration.

“As a kid, I used to play a lot in the river. That was my entire life. I used to catch a lot of crabs and eels here and that’s how learned a lot about what the river can give you,” he remembers.

Knowing how delicious smoked eel is, I can’t resist asking if eels can still be found in the Kouris. Sadly, he shakes his head.

“The dam has changed everything,” he says. “Some people say you can sometimes see them but the truth is they cannot make their way upstream anymore to breed. So for the last three years, I haven’t seen any.”

On graduating from high school, Andreas, unlike his friends who set off to study in Greece or the UK, decided to go in a different direction, a turning point that proved to be an important milestone leading to his eventual rendezvous with sturgeon.

“I am a communist and I like all the things connected with Russia and the former USSR,” he confesses, “so I decided to go to study in Moscow. That was where I first heard about Ivan Varvakis, a Greek man who single-handedly changed the history of black caviar.”

Ioannis Varvakis, an 18th-century Greek sailor, served with distinction in the Russo-Turkish War, for which a grateful Catherine the Great awarded him unlimited and duty-free fishing rights in the Caspian Sea. Varvakis was to settle in Astrakhan and later in Taganrog. He invented a special waterproof timber box that helped preserve the freshness of the caviar eggs. On the strength of this, he went on to become the first major exporter of the so-called “black gold” from Russia to Greece. Such was his wealth that he also became a major benefactor for the cause of Greece independence. He died on the Greek island of Zakynthos in 1825.

More than 100 years later, in 2012, the Greek movie director Yannis Smaragdis made a biographical film about his life entitled “God Loves Caviar”. The German actor Sebastian Koch known for his role in “The Life of the Others” played Varvakis.

It was the Varvakis story that inspired Andreas to devote his spare time to start learning more about sturgeon and caviar.

After graduation in Moscow, Christofi returned to Cyprus and started working at Loel, the renowned local spirit producer. Luckily for him, the company decided to send him back to Russia, in fact, all the way to the Krasnodar Krai in the northern Caucasus to study winemaking.

Once again a fascinated Christofi set out to learn more about the ancient fish that is the source of the legendary “black gold”. And that led to a meeting with one of the world’s top experts on the subject of sturgeon breeding, Professor Mikhail Chebanov.

Their friendship and cooperation remained intact over the years as Andreas made various forays into other, non-aquatic business ventures. After deciding it was time to part from Loel and go his own way, he acquired 200 hectares of land in Krasnodarsk Krai in the northern Caucasus, where he still maintains a fruit growing business. However, by 2007, Andreas decided it was time to return to Cyprus and he brought with him what amounted to a small gene pool of sturgeon, to see if it would be possible to breed them in Trimiklini.

His curiosity and determination paid off.

“By 2012, I had my first locally made black caviar,” he recalls with a smile. “Then it was just a matter of what to do in order to turn this achievement into a sustainable business.”

Easier said than done especially since at the time Andreas was embroiled in an ongoing dispute with bureaucratic authorities about money owed him from the EU subsidies for another project he had been working on. This was the construction of the island’s biggest privately-owned water reservoir, which he had built to irrigate the family’s orchards.

“It was my father’s dream and we did it,” he notes. Yet, whatever sense of accomplishment he might have had was dented, he says, by the experience which taught him to never again depend on bank loans or EU funding.

Five years on and he happily admits this philosophy combined with the holistic approach he has chosen for his new business is finally yielding the results he always hoped for.

Christofi is licensed to produce 20 tonnes of black caviar a year which, he says, is absolutely sufficient for his future plans and, given his current set up, would be hard to exceed anyway. Most of his clientele are Russians, many from the expat community in Limassol. Sometimes Cypriots and other nationalities also visit.

The Land of Dreams, despite the name, is not a place you slip into. The services offered are bespoke and must be booked in advance.

“Whether it is just fishing in our lake or having a meal or party here or just buying our black caviar – one needs to call us first so we can talk and decide together on what we should prepare,” Andreas explains.

“Our guests can also visit our orchards and handpick fruits for themselves or they can place orders and have our fruit and vegetables delivered to their homes. For those wishing to stay overnight, we have luxury wooden cottages that can accommodate up to six persons, We also have a wood-fired Russian sauna, equipped even with traditional brooms.”

The farm produces its own wines, continuing another family tradition that goes back hundreds of years but with the added benefit of Andreas’ studies in Krasnodarsk. And yes, on top of this and a special kind of Commandaria, there are also bottles of French champagne in Andreas’ fridge – a must in any establishment serving caviar.

Ask about charges and prices, and Andreas points you to his Land of Dreams Facebook profile and the pricelists for fishing and meals (https://www.facebook.com/landofdreamscy/).

The listing for caviar is enough to give pause, a timely reminder as to why it has been called “black gold”. A small 130-gramme can costs 180 euros. That adds up to 1,400 euros per kilogramme.

So business is booming? He stops for a moment as if readying an answer.

“Yes, if you ask me if my caviar sells, the answer is yes, absolutely yes. They are buying,” he finally answers.

After all, if, as the movie title says, “God loves caviar”, you could always go back further in movie history and paraphrase some of those old cowboy westerns by yelling out “There’s (black) gold in them thar hills!”

Rules: you can release sturgeon and carp back to the lake but not trout so you have to pay for caught trout

Menu prepared as agreed by a preliminary call

Plus other traditional home-made Cypriot dishes

Music brings poetry to the streets