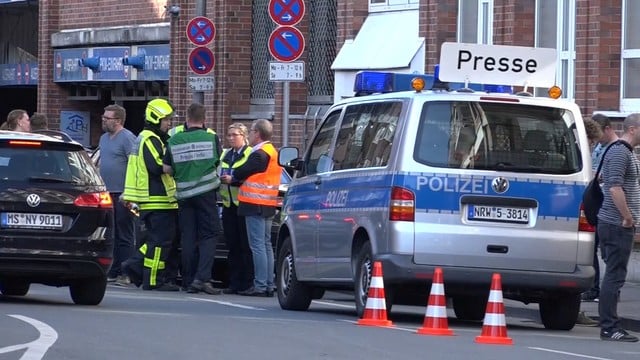 Police block a street near a place where a vehicle drove into a group of people killing several and injured many in Muenster Germany, April 7 2018. REUTERS/NonstopNews FOR EDITORIAL USE ONLY. NO RESALES. NO ARCHIVES

A man drove a van into a group of people sitting outside a popular restaurant in the old city centre of Muenster in western Germany on Saturday, killing several of them before taking his own life, police said.

“There are several dead,” a police spokeswoman said, adding that several of those injured were in critical condition. A police spokesman said around 30 people were injured.

A security source added: “The scenario is such that an attack cannot be ruled out.”

The van drove into people sitting at tables outside the Grosser Kiepenkerl restaurant, which is popular with tourists, the police spokeswoman said.

Mass-selling daily Bild reported in its online edition that three people had died in the incident.

Police said they were not looking for further suspects after the driver took his own life after the crash, but on Twitter they urged people to avoid Muenster city centre.

“The danger is over,” the police spokeswoman said.

Anis Amri, a failed Tunisian asylum seeker with Islamist links, hijacked a truck on Dec. 19, 2016, killed the driver and then ploughed it into a crowded marketplace, killing 11 more people and injuring dozens of others.

“I am shocked by the news from Muenster,” said Andrea Nahles, parliamentary leader of the Social Democrats, junior partner in Chancellor Angela Merkel’s ruling coalition.

“My thoughts are with the victims and their relatives,” she added. “I hope that our authorities can quickly clarify the background to this incident and wish the local forces much strength for their work.”