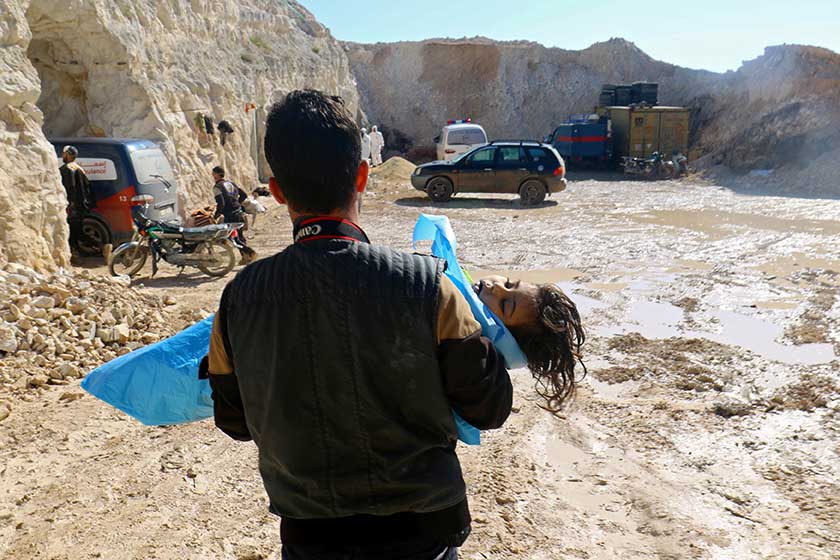 PHOTO ARCHIVE: A man carries the body of a dead child, after what rescue workers described as a suspected gas attack in the town of Khan Sheikhoun in rebel-held Idlib, Syria April 4

A chemical attack on a rebel-held town in eastern Ghouta killed dozens of people, a medical relief organisation and a rescue service said, and Washington said the reports – if confirmed – would demand an immediate international response.

A joint statement by the medical relief organisation Syrian American Medical Society (SAMS) and the civil defence, which operates in rebel-held areas, said 49 people had died.

The Russian-backed Syrian state denied government forces had launched any chemical attack as reports began circulating on Saturday night. The government said rebels in the eastern Ghouta town of Douma were collapsing and spreading false news.

The lifeless bodies of around a dozen children, women and men, some of them with foam at the mouth, were shown in one video circulated by activists. “Douma city, April 7 … there is a strong smell here,” a voice can be heard saying.

The U.S. State Department said reports of mass casualties from an alleged chemical weapons attack in Douma were “horrifying” and would, if confirmed, “demand an immediate response by the international community”.

President Bashar al-Assad has won back control of nearly all of eastern Ghouta in a Russian-backed military campaign that began in February, leaving just Douma in rebel hands. After a lull of a few days, government forces began bombarding Douma again on Friday.

The offensive in Ghouta has been one of the deadliest of the seven-year-long war, killing more than 1,600 civilians, according to the Syrian Observatory for Human Rights.

The Observatory said it could not confirm whether chemical weapons had been used in the attack on Saturday.

Observatory Director Rami Abdulrahman said 11 people had died in Douma as a result of suffocation caused by the smoke from conventional weapons being dropped by the government. It said a total of 70 people suffered breathing difficulties.

Basel Termanini, the U.S.-based vice president of SAMS, told Reuters another 35 people had been killed at the nearby apartment building, most of them women and children.

SAMS operates 139 medical facilities in Syria where it supports 1,880 medical personnel, according to its website.

“We are contacting the U.N. and the U.S. government and the European governments,” he said by telephone.

The joint statement from SAMS and the civil defence said medical centres had received more than 500 cases of people suffering breathing difficulties, frothing from the mouth and smelling of chlorine.

One of the victims was dead on arrival, and six died later, it said. Civil defence volunteers reported more than 42 cases of people dead at their homes showing the same symptoms, it said.

“The Assad regime and its backers must be held accountable and any further attacks prevented immediately,” she said.

“The United States calls on Russia to end this unmitigated support immediately and work with the international community to prevent further, barbaric chemical weapons attacks,” Nauert said in a statement.

The Syrian government has repeatedly denied using chemical weapons during the conflict.